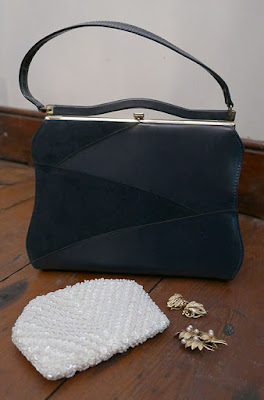 If you read Goody's blog, you'll know she is the Queen of Accessorising. (And if you don't read it, you should, because she is the Queen of Accessorising.) She recently did a post featuring a navy handbag; I mentioned I was looking for a navy handbag, and she kindly said she'd send me one. And here it is! Isn't it splendid? I love the swooping curves of the suede and leather panels.

The label inside says it is a 'Life Stride' handbag. I did a quick Google search and it looks as though Life Stride are a shoe company – makes sense – and they're still going today. Thanks to the fact the company changed its typeface fairly regularly, I can be certain this particular bag is late 1950s-1960s. It looks it from the outside, but the label proves it. Isn't it nice when manufacturers are so considerate?

(On the subject of handbags, did you see Antiques Roadshow at the weekend? They had a vintage boxy bag with gold-plated interior with holders for things like lipstick and perfume, and it LIT UP. A light-up handbag? How cool is that?)

Being naughty in the best possible way, Goody sent me a pile of other things too.

There was a lovely faux pearl brooch and pair of Lisner earrings, and a cute little pearl-beaded evening bag. I'm planning to take the navy bag to work tomorrow, and probably one of the pieces of jewellery. Maybe both – we shall see.

There was a couple of cookbooks. I'll cover these more in some detail over on Greedybots later in the week. One is Great Home Cooking In America, a compendium of traditional American food. The baking recipes look rather delicious. Not for nothing is that country famed for its home baking. The other book... Body Building Dishes For Children... Let's just say I'm glad I wasn't a child in 1940s America! I like liver, but it features far too much liver. There's even a recipe for liver sandwiches. Though you could just fry it. Anyone for a half-inch-thick slice of fried liver? 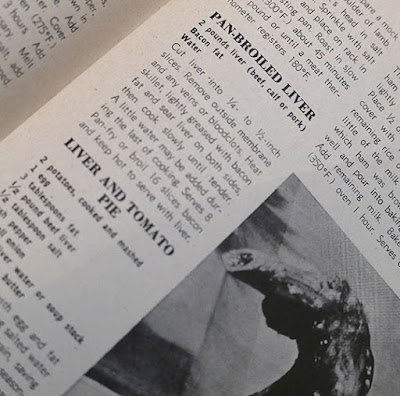 And then there were two copies of The Workbasket. From the cover I thought it would be like Stitchcraft in the UK, but it doesn't have as many big projects. The designs on the covers are included, and are in several sizes. Most of the other makes are smaller, quicker things, like knitted or crocheted lace edgings, and simple slippers. 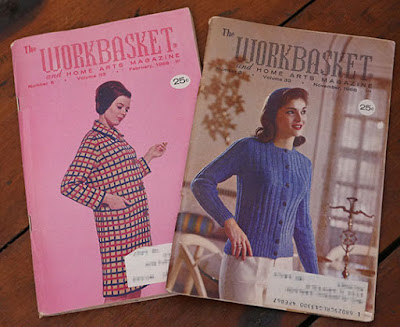 What I like is the adverts. You can really see how much wealthier America was, in general. Adverts for electric scissors, accordions, a John F Kennedy coin set. There's a lot, too on earning through crafts, from selling what you make, or selling pecan nuts. I don't think British magazines ever pushed this entrepreneurial aspect. 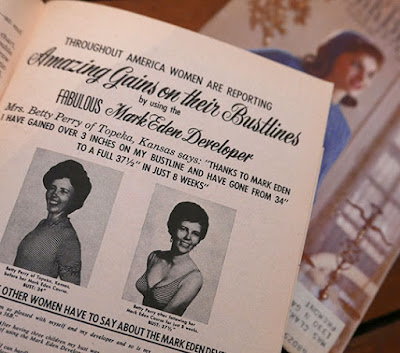 Of course, you could always improve your assets in other ways!
Labels: 1950s 1960s accessories books food magazines