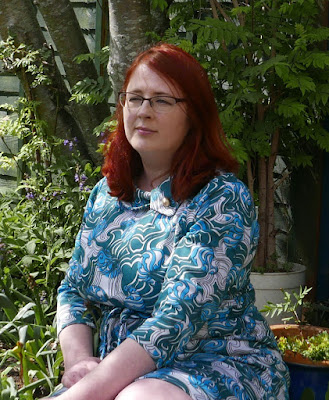 Ten years ago, this dress would have been the stuff of my nightmares. Crimplene, exuberant pattern… not something I'd have touched. Three years ago I'd probably still have quickly skimmed over it on the rack. But isn't it funny how tastes shift and change? I spotted this last week in Secondhand Rose's Etsy shop and pounced immediately.

Tara King is still very much one of my style icons, and my initial thought was, 'It's Taralicious!' Looking more closely at her, though, she tended to wear block colours and mini skirts. It's not really very Tara at all, though I do think in its bright colours and psychedelic pattern it is true to the spirit of the last series of The Avengers, even if it's not what Tara herself would wear.


It's an odd length for a 1960s garment – could it be early 70s? The collar shape is definitely 60s. A pattern this active looks like it belongs on a trendier garment, either a mini-dress or a flamboyant maxi. I couldn't find any evidence of rehemming, though, and the hem is stitched with thread matching the side seams, so I think this rather staid shape is the way it was supposed to look. It's not homemade; there's a crimplene tag, though no manufacturer's name. Maybe it was something for the fashionable fatty of the 1960s, the girl who longed for Biba but was more Mama Cass in shape. I like the length, it makes the dress more suitable for work. 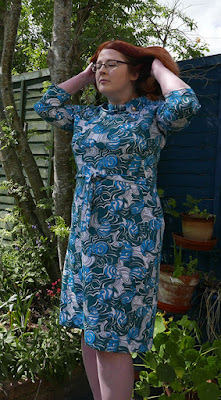 I've been quite stressed of late and that's translated into some serious negativity about my appearance. Skin, body, you name it, I'm not happy with it. I haven't actually worn this dress out because I've been worried I'd look like some sort of far-out zeppelin in it. I put it on to show you, because I haven't posted much and most people enjoy clothes. And you know what? It actually looks okay! I'm fairly cylindrical in shape, but that's my body shape. I'm thinking I might ditch the belt when I wear it, as all the tie belt does is draw attention to the fact there's no waist to cinch in. I certainly don't look as bad as my brain is telling me I look. And the colours are fab. So thank you for reading my outfit posts, because I might still be thinking daft thoughts if I hadn't wanted to take these photos for you. Here's to you, and here's to psychedelic crimplene.