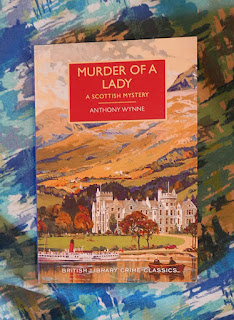 I've been hiding away in books a lot lately. Well, who wouldn't? Usually the settings are nicer and the manners better - if you read as much Golden Age crime as I do, that is. My latest reads have been a 1930s crime novel and a couple of 1970s science fiction TV tie-ins.

Murder of a Lady was a Christmas gift (my Amazon wishlist keeps my family happy!) but I've only just got round to reading it. I hadn't read any of Anthony Wynne's novels before this one, but it doesn't leave me enthused to read more.


According to the introduction, Wynne was a specialist in the 'locked room' mystery. While I like crime novels that present something of a mental challenge, such as Freeman Wills Crofts' intricately-plotted stories, this one dragged rather. Most of the characters were pretty awful in some way, to the point where I wasn't too worried what happened to most of them, and Wynne's tone seemed rather patronising towards the Scottish aristocrats involved in the case. I didn't get the weapon quite right, but I'd half-worked out the solution from the first murder. Waiting for the detective to solve it became a bit of a bore. At least the cover is nice - those lovely steamers still do tour round the coast of Scotland, I believe.

A complete change from crime novels, aside from also being a bit of pure escapism, is these novelisations of the television programme UFO, written by a man called Robert Miall. I've never heard of him, but would guess that's the pen name for a ghost writer. The books are far from works of high literature, but then they're not supposed to be, they're pulpy TV tie-ins and in that respect hit the spot perfectly. The sexism annoys me a little; UFO had a female-run Moonbase, but everything in these books is told from the perspective of a variety of male characters, and the attractiveness of the female ones is mentioned more or less constantly. It's a fairly small annoyance for me, though, and hasn't put me off the books. 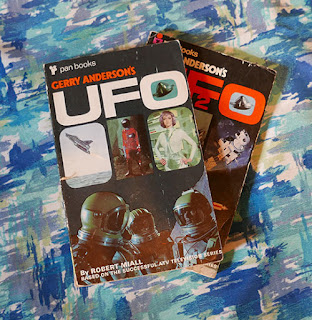 In case you're wondering about the backdrop, it's some vintage crepe I bought. No, I still can't sew. I have a terrible habit of shopping online when I get a bit stressed at work, and with two deadlines a month now instead of one, I'm developing a bad habit of cheering myself up with Stuff. Still, this isn't a huge piece of cloth...
Labels: 1930s 1970s books crime science fiction