Be My Baby [music] 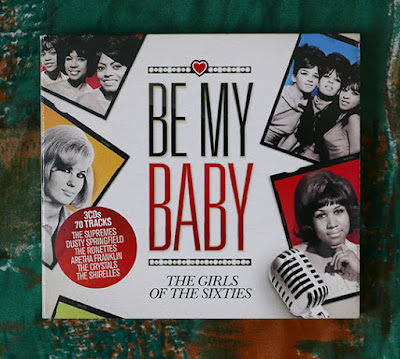 Who doesn't love the sassy girl bands of the 60s? From the bad-girl Shangri-Las to the effervescent Crystals to the romantic Ronettes, there's something captivating about them. I love the tight vocal harmonies, snappy pace and overall feeling of fun. And, of course, they're all pretty good hairdo/fashion inspiration for me. I've been wanting a compilation of girl band hits for a while, and thought this one would fit the bill.


The subtitle 'The girls of the sixties', but that's when all the acts were at their peaks. A few of the tracks are actually from the 50s and 70s. (There's a small note explaining this on the back of the sleeve, which wasn't obvious on Amazon.) I'd imagined from the title that the music would be all Motown-esque girl groups, but it's a little more diverse than that. The tracks are arranged in a vaguely chronological order, the earlier stuff mainly being on the first disc and the later stuff on the last one, and, as always with anything 1960s, my liking for the music wears off as the decade progresses. Disc three has things like Janis Joplin singing 'Me And Bobby McGee', Merrilee Rush's 'Angel of the Morning' and Cher doing a cover 'Sunny'. Not really my sort of thing.

Disc one is where it's at, as far as I'm concerned. It opens with The Ronettes doing 'Be My Baby'. And then comes The Crystals doing 'Then He Kissed Me', and The Supremes with 'You Can't Hurry Love'. There are a few tracks on disc one that don't quite fit the patterns – Peggy Lee's 'Fever' and Doris Day's 'Move Over Darling', but I really like them, so they're not really a problem.

Disc two has more of the Brits, like Petula Clark, Sandie Shaw, Cilla (doing 'Something Tells Me'; one of her less screechy ones), and of course the mighty Dusty. (I don't own a purely Dusty CD. WHY DO I NOT HAVE DUSTY IN MEMPHIS? Stupid Mim.) It makes a tolerable alternative when I've listened to disc one too many times, and it does have a bit of Ronettes, Crystals and others on.

I don't have any regrets about buying this set, even if disc three won't get played very often. It wasn't very pricy, and fills the Motown/Wall of Sound gap in my music collection nicely.