Slow your Mustang down 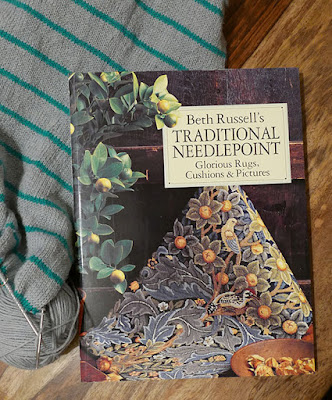 Slowing down and social media don't really go together. Even though I don't pay much attention to the number of followers my blog has, I still get the fear that if I go too long without posting everyone will move on and I'll find myself shouting into a digital void. (This is stupid. On the internet, there's always someone listening, even if it's just a troll who'll respond with 'lulz u suck' or an impressively rich bloke with a vast amount of money he needs to store in your bank account and just needs your account numbers for.) Of late, though, I haven't so much fallen out of the habit of posting, as deliberately embraced it. I don't have to live my life online. I can just live it.

My current knitting is making me think about slowness. Yeah, it's the same cardigan for a friend that I started at Christmas. I did warn the recipient that I am a slow knitter! It's not even from a vintage pattern, so I don't share it with you. It's coming along, though: every day I do a little bit, and it gets closer to completion. It started with one stitch, and will end with one stitch, so none of the others in between are any less important, they just seem less noteworthy. I don't think I'll manage to knit a 1960s summer top in time to wear it, though. Maybe I should start a winter knit as soon as I've finished the cardi.
I know life in the past wasn't easy – I can't imagine going without a washing machine, or having to go to the shops most days, even in a dank, wet late autumn, because I don't have a fridge to keep things fresh. But it does sometimes seem that people had more time to focus on things in the past, perhaps because they had fewer silly distractions like mobile phones. Would 1930s Mim have completed her cardigan by now? 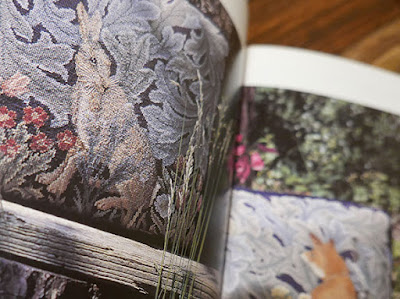 Because a cardigan and an embroidered tablecloth aren't enough, I'm also hankering to make some bits and bobs for the living room. I've had this book of Beth Russell's needlepoint patterns based on the designs of William Morris for literally years. Possibly 15, perhaps even getting on for 20. All hail the office clearouts of yore. Several times it's nearly been sent to the charity shop, but I love Morris and always promised myself I'd make something from the book one day. Now the living room is looking rather Edwardian, it seems to me that a couple of cushions based on these designs would be perfect. Something to take my time over.

On one final note, remember that fabric I bought some of and used as a backdrop in my last post? I've just found a seller with loads more at a good price. And it's payday this week. Is this fate's way of saying MIM, BUY THE FABRIC?
Labels: craft homewares knitting Victoriana