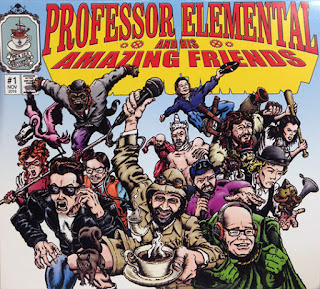 Hop-hop isn't my thing at all, so I'm still not sure why I like Professor Elemental. Perhaps it's because I've seen him live, in the company of steampunks, and he always puts on a fantastic show. Perhaps it's that the samples he uses are often from vintage music, little snippets of trumpet or clarinet or jazz piano, which echo the music I listen to normally enough to feel accessible. Perhaps it's his sense of fun, singing about animals and tea and the joy of simply being at home. Whatever. I like it.

This is his latest album, subtitled 'A Collection of Collaborations, Remixes and Rarities'. I support Professor Elemental on Patreon. Part of the reason I signed up to do that is that he collaborates so often with other artists, producing not just music, but comics and videos and so much more. It's hard not to warm to someone who's so generous with their success and influence. As for the album, I really enjoy it. For all that the Prof is a consciously-created character, the sentiment doesn't feel fake. When there's whimsy, it feels genuine. When there's silliness, it's authentically joyful. When in 'Bare Witness' the Prof decides to complain about the state of modern hip-hop, money obsessed, you don't doubt that he really does believe that “What hip-hop needs is more anarchic parties.”

So, what are the standout tracks? 'All In It Together (DNB remix)' is so positive it's hard not to want to cheer along to it. 'Mechtoria', about a world of robots, is both bonkers and hilarious, and the pounding piano makes it sound like it should be the soundtrack to a very bizarre silent film. 'Put Up Ya Dukes', a song of airships and aristocrats, is classic Prof. 'The Wages of Gin' ends up with him being sick, having passed out on the doormat. We've all been there. (Probably a good partner for Caro Emerald's 'Liquid Lunch', should you fancy compiling a hangover songs playlist.) Finally, because they're closest to playing around with vintage music, I do love the short 'skit' pieces.

Would I recommend this CD? You know, even if you don't like hip-hop – perhaps especially if you don't like hip-hop – I do recommend it. There's something about the way he works with samples from jazz-age records that makes me feel it's more accessible to vintage lovers than a lot of modern music. And even if you think you'll really hate his music and don't want a CD, if you get the chance to see Professor Elemental live, make sure you go.
Labels: Music steampunk