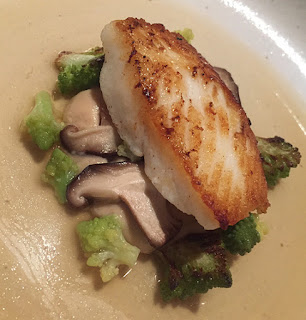 It was my birthday on Sunday, and I had a splendid meal. We went to the Olive Tree in Bath and had an eight-course tasting menu. Eight courses sounds like a lot, but the portions are very small, so you're never overwhelmed with food. The menu we had was virtually the same as the sample one on the website, except that there was rose veal instead of the beef, and lemon instead of the rhubarb. I'm not a big fish eater, but I think the two fish dishes - crab lasagne with basil, and brill with cauliflower, shiitake mushrooms and dashi - were my favourites.The romesco cauliflower was ever so slightly charred, which added interest to the flavour.

My least favourite part of the meal was the chocolate pudding. I'm not very sophisticated when it comes to chocolate, and while I know 72% is very high in cocoa solids and supposed to be the good stuff, texturally it struck me as like eating a chocolate-flavoured candle. I actually left half the chocolate ball from that one, though the mandarin mousse and granita was fab.

We had the wine flight with it - five of the courses came paired with a glass of matching wine. The one that really stands out for me was a German red. I love German wine but I've never had a red one before. It tasted almost of lychees, it was remarkable. What with all that wine, and a martini before the meal, and smallish portions of food, I was a bit squiffy by the time we went home... 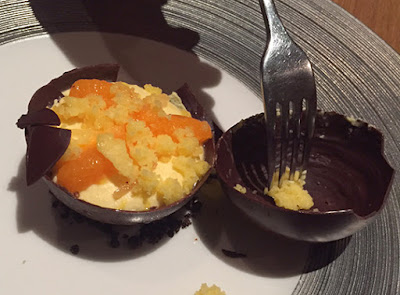 I did get some other lovely presents, including bath stuff, a scarf from Marija, lingerie from Pete (you're not getting a photo of that...) and...

(It's getting its own paragraph because it deserves it...) 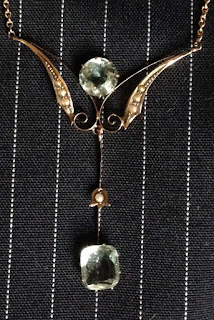 An Edwardian seed pearl and aquamarine necklace! From Pete, obviously. He spoils me. It's less intricate than a lot of Edwardian pendants I've seen, though still very delicate. The aquas are monsters; the round one at the top has to be about 8mm across. I like jewellery, and they are really super aquamarines; a good colour and as clear as anything. They certainly sparkle well. I wore it to dinner, though I'm honestly not sure where else I'll wear it. Clearly he needs to start taking me to even more swanky places. Or maybe I'll wear it to work, just because I can!