A day out around Wiltshire

We haven't been out much this week, having had DIY to do. However, as part of our ongoing (neverending!) work on the house, we really want a cabinet to go in the dining room to hold the plates and so on that we keep buying from charity shops. Having finally got rid of the 1950s Prestcold fridge, we decided to go to Chippenham to check out the two furniture chazzas there - one British Heart Foundation, and one Dorothy House (local hospice charity).

While both shops had some great stuff (if you're looking for a 30s-looking wardrobe or 1950s dressing table, Chippenham has what you need) neither had the sort of cabinet we were looking for. Our search is complicated by the fact that our dining room radiator doesn't leave much width, but we need the cabinet to be deep enough to hold plates. I found a lovely display cabinet that looked quite 1920s-30s to me (not deco, just of that time) in the BHF shop, but it simply didn't have the depth.

As we hadn't spent masses of time in Chippenham, we drove home via Devizes, thinking perhaps we needed to start looking in proper antique shops rather than in charity shops.

Chippenham, like Trowbridge where I live, shows signs of having once been a much more prestigious town than it now is. Both have wonderful sandstone buildings that clearly date from the 1800s-1920s, and more than their fair share of chazzas and takeaways. Honestly, you wouldn't believe Trow is the county town of Wiltshire to see it, though it has improved vastly over the past decade. But I like Trow, and the people of Chippenham no doubt love their town, even if it's not somewhere you'd take tourists to. Devizes, on the other hand, is very much somewhere you'd take tourists to. It's still got a big market square - the market was on while we were there, so I didn't bother taking any photos, as it's a proper local market selling things like cheese and pork pies and veg, not some cutesy thing to appeal to coach parties. 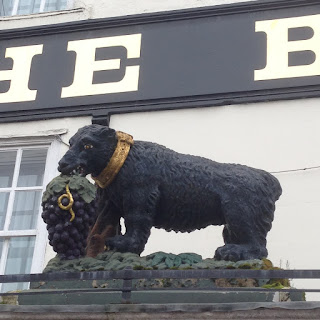 There were some impressive buildings on the square - I love a good animal statue, and the funny-looking bear on top of The Bear hotel amused me no end. It looks like a Newfoundland dog was the model. We wandered through the back streets and found a little row of 16th-century buildings, and a rather good vintage shop which I thought was the one mentioned by Annotations of Jenny, but now I look at her post again I see she said the vintage clothing was on the top floor but this shop had clothing out the back, so either they've moved the clothes or there are two good vintage shops in Devizes. At any rate, it had many super things, but our quest for a cabinet will continue.

I have had a lean time in charity shops of late. I know most people prefer modern clothes, so I am in the minority for looking for older stuff, but I have found so little of any interest recently. With my liking for simple shapes and slightly later-era clothing, it shouldn't be impossible for me to find things that could be mixed in with vintage, but it really has been dire. Everything's been ruffly, embellished, or just plain poor quality. Seriously, WHERE IS ALL THE GOOD STUFF GOING? (Ronni and Vix are finding it all...) Anyway, like my cabinet quest, my charity shop haunting will continue. Sooner or later the chazza gods will smile on me again.
Labels: charity shopping wiltshire