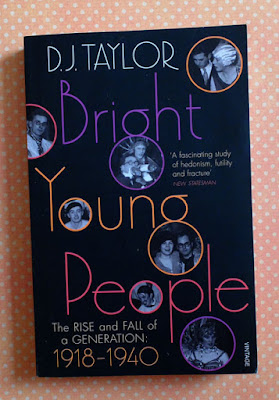 It's taken me a while to finish reading this book charting the lives of the 1920s 'Bright Young People'. I don't know why; the 1920s as a decade fascinate me greatly, and the men and women who made up London's most newsworthy social set at that time in many ways exemplify what we think of when we imagine the period.

Possibly I didn't immediately get to grips with the book because on the whole I like stories, and the Bright Young People were more numerous than you usually encounter in stories featuring fictional characters, and real lives don't rarely have neat and tidy beginnings and endings. DJ Taylor gets round that by opening with the event that was possibly 'peak Bright Young People', the Bath and Bottle party thrown by Elizabeth Ponsonby, 'Babe' Plunkett Greene, Eddie Gathorne-Hardy and Brian Howard, held in a swimming pool with attendees in bathing suits. While the exact pattern of the rise of the BYPs might be debatable, and their lives after the early 1930s all move off in different directions, that party was unarguably one featuring all the central figures, with all the press attention and notoriety that characterised the group. Nonetheless, with so many people and places popping up, at first everything felt (to me) rather chaotic.


Out of the swirl of names and faces and parties, probably every bit as hectic as the actual 1920s social whirl, figures start to appear. Evelyn Waugh and Cecil Beaton, and Nancy and Diana Mitford need no real introduction, though it is fascinating to see them in context. The ones who really stood out to me were the ones I knew very little about, and who left very little of long-lasting substance behind them, yet without whom the decade, and the books it inspired, would have been far less interesting. Elizabeth Ponsonby, Brian Howard and Brenda Dean Paul definitely fall into that bracket. They chose their lifestyles, and were immensely privileged, yet I find myself pitying them nonetheless. They created their age, and it devoured them.

Overall, the tone is quite sorrowful; an awareness of where so many of the figures would end up (especially as Elizabeth Ponsonby is the focus of so much attention) means there's a sense of tears under the glitter even when the brightest of the parties are described. I enjoyed the book, but it didn't convey as much of the fun of the 1920s as I'd hoped it would.
Labels: 1920s 1930s books