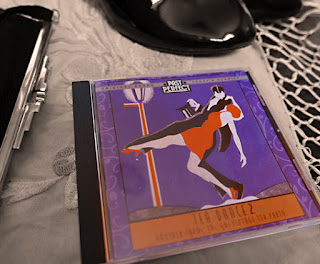 Who's ready for another turn around the dance floor? I am, even if you're not. This is the second of the two Tea Dance CDs I bought from Past Perfect last month. (Here's my review of the first Tea Dance CD.) Stylistically, it's very similar to the first: polite, upbeat songs that suit an afternoon of tea, cake and foxtrots. However, it doesn't have the strong beverage theme of that collection.

One thing that might disappoint you, depending on your music collection and how you access it, is that there are a lot of better-known tracks in this one, including the Glenn Miller versions of 'String of Pearls', 'American Patrol', and 'Moonlight Serenade', Benny Goodman's 'When Buddha Smiles', Tommy Dorsey's 'On the Sunny Side of the Street', and Artie Shaw's rendition of 'Begin the Beguine'. They're all wonderful, but if you have any swing music, you'll probably have at least one of those – all those bandleaders are celebrated enough that you might have CD sets dedicated to them, and all those tracks appear on many other compilations. If you only listen to your music on CD one at a time, you might enjoy hearing them again as part of this disc, but if you do what I do, which is mainly listen to music by genre on iTunes, you won't need them again.

(One of Mr Robot's gripes is that playlists have killed off the album, and the planning of the album, and I guess he is right there. I have been trying to listen to music as albums in its entirety, but I do also like my mega-playlists as I can't predict exactly what will play next, making it a happy midpoint between CDs and the radio.)

I guess for some dancers, knowing the tune helps them relax more and focus on their dancing, so the familiarity of some tracks might make this disc more popular with the audience if you were to play it at an actual tea dance.

Of course, getting excellent music for the second or third time is still always going to be preferable to getting awful music for the first time. Happily, even the lesser-known tracks on this disc are really enjoyable. I like the cheeky bounciness of 'On the Beach at Bali Bali' by Billy Merrin and Jack Hylton's 'That's You Baby/Walking With Susie' medley.

Would I recommend this CD? Yes, if you're going to listen to it as a standalone disc, or you don't already have a largish collection of vintage music. Yes, if you want a CD that you can leave on at an event or in a tea room knowing that it's full of crowd-pleasers, with nothing too up- or down-tempo to disrupt the mood. I certainly don't regret buying it, but if you're pushed for cash and want to avoid re-purchasing the usual suspects, you probably want a different disc. (How about the first Tea Dance?...)
Labels: 1920s 1930s 1940s Music