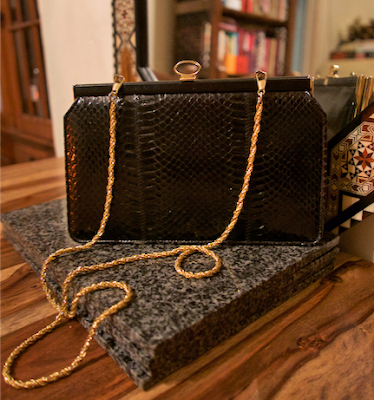 Last weekend Mr Robot and I had a good trawl round the charity shops. I was after midcentury china, for a little shoot I was doing for In Retrospect. As it happens I found a couple of lovely plates – both Midwinter, one Oakley and one Queensbury Stripe – that were perfect, though the shoot didn't go as well as I'd hoped so I'll be trying again this weekend*. However, the thing about charity shopping is that you can't really predict things; all you can plan is to go and look, and hope the Charity Shop Gods reward you. Shopping with a vague aim – 'midcentury china' this time – will always turn up something, but if I were to go out with the aim of buying something as specific as a particular china pattern, or a 1960s bag, I'd be disappointed 99 per cent of the time.

Last weekend was the other one per cent.
I nearly, very nearly, left this 1960s leather (fake-snake) bag by Eros on the shelf as I don't really need an evening bag of any sort, and it's a little too small to hold all my work-day gubbins. However, boxy bags seem to be becoming rarer, and I really liked it, and it was only £6, so I bought it anyhow. After all, who knows when I might need one, and then I'll be glad I've got this. The bag has clearly been used, as there's a little wear on the bottom and the swing-out hinges on the chain handle, but whoever owned it obviously was proud of it and looked after it, as she kept the original tag inside.

It's debatable which of us had the better day's haul. I got my Midwinter plates and 60s bag, whereas Mr Robot got a set of plates (we are horribly addicted to dinnerware) and a little silver-and-glass jam pot. Then he had his big find. We do try to be restrained in our acquisitions because our house, the kitchen in particular, is so small, but as soon as I spotted this set of carved wooden salad bowls, I knew he'd want them. His face lit up when he saw them! They're not exactly small, but when something is this perfect, how can you leave it behind? They're really very us: wooden salad bowls are very midcentury, but the carving looks East Asian and fits in with the general 'Victorian Traveller' style of most of our home, and the fact they were only £6.50 appealed to our cheapskate side. 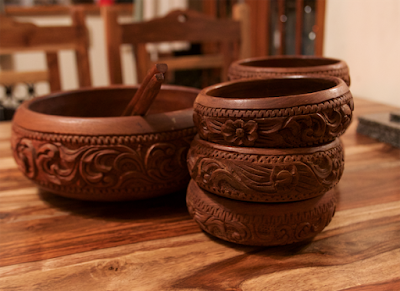 I'd lost my charity shopping appetite for a while, but stuck at it, reasoning that if I just kept on with it, sooner or later I'd find something great and my love of the chazzas would return. Oh boy, has it returned now...