Something wicked this way comes 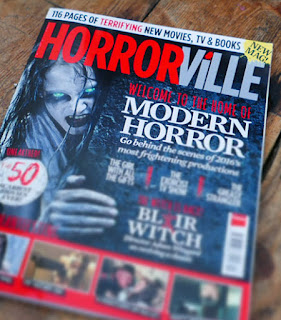 It's own-trumpet-blowing time again, I'm afraid – the latest publication to feature my book reviews is brand-new launch Horrorville. It's from the same stable as SFX and Crime Scene, both of which I also review for, so the editor knew I was a reliable reviewer with a genuine interest in the subject matter.* Long-term readers of the Robot will know I devote every October on this blog to things both spooky and vintage. As with crime fiction, I'm more a fan of classic horror than modern stuff on the screen, though I will read absolutely anything. I even have a playlist of vintage Halloween pop songs on my iPod! Horrorville doesn't really cater to the vintage lover, though issue 1 does have an interview with Fabio Frizzi, who scored a lot of Lucio Fulci's late 1970s/early 1980s horror films.


My next freelance is for In Retrospect; I'm hoping to style up and shoot some images for that article over the weekend. (Obviously not images of me; those would be more appropriate in Horrorville.) In Retrospect is the only magazine I supply images for, but I do enjoy the challenge of taking or, on occasion, sourcing them. When I can, I grovel at Mr Robot to supply me with photos as he's much better at taking pictures than I am. 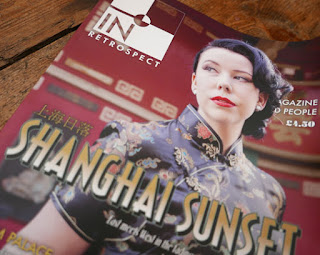 My last article for In Retrospect was on holidaying like the great bombshells (just in case you fancied emulating Bardot at Cannes or Ava Gardner on the Costa Brava, and my next published one should be on travelling through Spain in the footsteps of great writers, Ernest Hemingway and Laurie Lee in particular, and as I lost my camera in Segovia his photos were all I had to go on. The bombshell article's in the current issue, by the way, which is still for sale online, and the next issue is going to press so there will be all sorts of new goodness available soon.

I usually write travel articles for In Retrospect, but my next piece has a food and drink focus. Intrigued? I promise, it's not just an excuse for me to trawl the chazzas for photo props. (We never need an excuse to buy more pottery; Mr Robot and I were that >< close to buying a set of 1970s soup cups last weekend. However, I will trawl the chazzas because a few more photo props never does any harm...)

I sometimes get frustrated at how little time I seem to have, and feel I never get anything done when other people are doing so much amazing stuff, but looking at my magazines I can see where my time goes and that I probably have done quite a lot. I love working in publishing. There's nothing like being able to share your passions with other people – that's why I blog, after all.

*I'm feeling a bit defensive as I hate the old maxim 'It's not what you know, it's who you know'. Trust me, no-one gets freelance work simply because they know someone; delivering consistently good work on time is the important thing! Though I admit, having contacts and a good reputation does make getting work easier.
Labels: horror magazines Mai Trumpet I Bloez It