Only the brave deserve the fair!

Yes, it's one of my favourite times of the year, the time when Carter's Steam Fair is in town. It's in Bath from the 6th to the 14th, though when I passed through the park on my morning walk yesterday they were already getting set up. Those beautiful vintage steam-powered amusements take time to put in place. 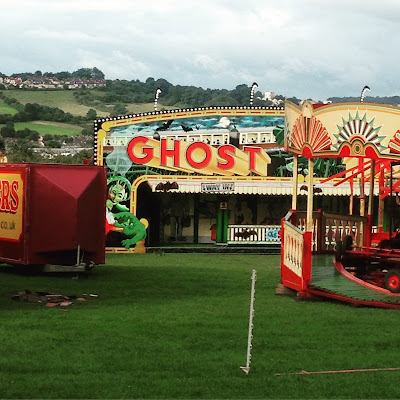 One ride interested me particularly. A GHOST TRAIN. This wasn't part of the fair on any of the previous times I went to it, so I am very, very excited by this. Vintage and horror in one gorgeously-restored package. I don't know which days Mr Robot and I will visit the fair on, but I'm going along with my friend Andrea after work next Thursday, and I bet the ride looks thrilling in the twilight.

Aside from that, I have work news: I'm going to move to a new magazine. It's not that I don't like my current one, but a big part of my job is checking spelling and grammar, and fact-checking, and so I read every page in every issue at least twice, and after four years on the same magazine I really fancy moving to a different subject. From the start of October I'm going to be Operations Editor on Official PlayStation. I worked on a PlayStation mag back in the early noughties, and then on a Nintendo one, so it's not as odd a move for me as you might think. Games magazines are really challenging as the subject is so time-sensitive - on a knitting or camera title, you can plan chunks of the publication months in advance, but that's pretty much impossible with games. I'm looking forward to the challenge. 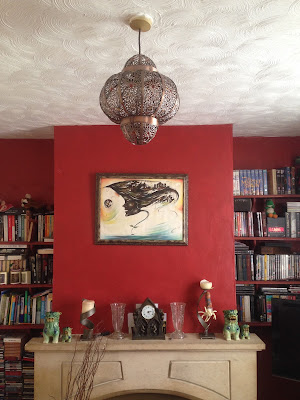 Mr Robot and I also have the urge to do more around the house. We bought a new lampshade for the living room last weekend - just spotted it in Wilko - and it's made such a difference to the room.

Look at that horrible fireplace. LOOK AT IT. It's grubby, cracked - and you can't see the missing chunk behind the left-hand foo dogs. It's far too large for the chimney breast, so we'd like to get rid of it and replace it with one in keeping with the house. We'll probably go Victorian repro rather than actual Victorian, though, as it'll be half the price. We need to get rid of the old, oversized fireplace before we can do the floor, but we want a real fire so we'll need to have the chimney inspected and probably relined... think of one job and about five others pop up! And we've got a pile of stuff we want to do in the kitchen first...
Labels: robot data