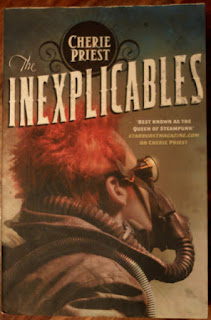 I've just finished reading the fifth novel in Cherie Priest's Clockwork Century series. The great things about the Clockwork Century novels is that you don't have to read them in order, and as I haven't read them in chronological order I appreciate that. You can read one, or read them all. If you have read the later ones, it will give you an inkling as to what might happen in the earlier stories, but as each novel has a different protagonist and is a complete story in itself nothing's really spoiled.

This novel is set inside the Victorian city of Seattle, walled-in after a scientist's diggings released a deadly gas capable of killing people yet leaving them mobile, as shambling 'rotters'. (That's covered in detail in the first book in the series, Boneshaker.) In this one Rector Sherman, an orphan who'd got into the habit of selling and using 'sap', a drug made from the gas Blight, is too old to stay in the orphanage he'd grown up in, so heads inside the walled city to try to find out what happened to the dead friend who haunts him.

Of all the books in the series that I've read so far, this was my least favourite. The first is boosted by the novelty of the walled city setting, and Briar Wilkes' desire to find her runaway son. Other volumes have the thrill of adventure (air pirates! The – still ongoing – American Civil War! African-American scientists on the run!) and new locations, all with a Clockwork Century twist that makes them intriguing. The alternate history aspect of the other books is also stronger. This time I already knew the city (though it was interesting to see how it had changed and become more organised in the books since Boneshaker) and lead character Rector was pretty hard to care about. Moreover, the plot felt like it was setting the scene for what was going on in the world beyond Seattle, and somehow wasn't as exciting. The Inexplicables of the title felt out of place, almost an afterthought compared to the rest of the plot. That isn't to say I didn't enjoy the novel, because I did. It's just the weakest volume in an outstanding series. I still recommend the whole series.

It's taken me a long while to get round to this because it was a gift from my late mother-in-law. Somehow, reading the last book from her, knowing I'd never read another new book from her, made me reluctant to pick it up. (I'm funny like that; I still haven't read Raising Steam, Terry Pratchett's last novel for grownups. I get it off the shelf every once in a while and then put it back, because as long as I haven't read it, there's still a new Pratchett waiting for me.) However, reading The Inexplicables has reminded me how much I enjoy these books. I'm going to get the one I'm missing and binge-read the entire sequence at some point...

I've also blogged about the fourth book, Ganymede, and the last book, Fiddlehead, in the series.
Labels: books steampunk