The Wife of Bath(room shenanigans) 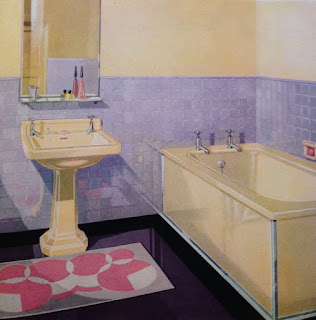 If you've been reading this blog for a while, you'll know we've been putting some work in on the House of Robots. It's an old house and was ex-rental when we bought it, and we always knew lots of it needed work. Well, now we're contemplating one of the big jobs: redoing the bathroom.

To be honest, our bathroom needed replacing when we moved in about 15 years ago; there was a crack in the bottom of the bathtub and a whopping great chunk knocked out of the sink. But we had no money to replace these things, so we simply filled the holes with rubber sealant and lived with them. Now we can replace them, and you know what? I've been staggered by how much I dislike most modern bathroom options!

Half the problem was that I had a vague idea of a style I wanted, something influenced by Spain, the southwestern US/Mexico and our travels, with lots of warm, earthy colours balanced with turquoise and cobalt, and a strong 'handmade' feel. This was partly because Mr Robot really wants to keep the terracotta colour that's on the walls at present. Now, modern bathroom fittings are available in any colour as long as it's white. Boring! I thought that as a lot of older Spanish interiors feature white walls and very dark wood, the white would be just about workable if we had the right cabinets to go with it, something dark with a fairly textured, natural feel... only that was asking too much too, it would seem; flat and featureless with long handles is the norm.

So. Faced with nothing but streamlined and modern, I decided to turn my ideas upside down. If I couldn't get the look I wanted, what look could I create from what was available? Streamlined, modern... art deco, no? I dug out two of my 1930s books containing home design advice. Modern Decorative Art by Maurice SR Adams was no good. It's a great thick volume, produced in 1930 by the furniture-manufacturing firm of Maurice Adams. It's got lots of lovely plates of very high-end interiors showcasing their furniture... and not a bathroom in sight! Just a brief mention tacked onto bedrooms. However, it was clearly written for the very rich of 1930:

"Each principal bedroom probably has its own bathroom with hot and cold water supplies and shower... Appropriate luxury in bathrooms is now the vogue. The bath itself will have marble enclosure or other of similar character. The walls will be lined with marble, mosaic or glass."

I was pretty sure this was out of my price range before I reached the suggestion for a domed ceiling 'painted to resemble a clouded blue sky'! But then, what did I expect from a book that contained fold-out models of rooms aboard a yacht at the back? (If you're ever furnishing staterooms on a 1930s yacht, let me know...)

So, time to take a step downmarket - though not too far. The Bride's Book, which I think was from about 1936, always gives me the impression of something aimed at Nice Gels who suddenly found themselves married and running their own home without servants. It's got advice on everything from choosing gloves, dresses and riding habits to how to clean things and even pregnancy. This had two whole pages devoted to bathrooms - as much space as it gives to cocktails!

"Even a bathroom that is not very modern can be greatly improved if a bit of ingenuity is brought to the problem. Walls can be repainted a pale colour. A coat of black enamel on the outside of the tub, an application of black varnish to old and discoloured woodwork, and bright red curtains at the window, will help to transform such a room into a much more pleasing place."

A tad more helpful, then, but still not quite what I was hoping for. In the end, we went to spend my birthday garden centre vouchers today, and stopped off at a local department store on the way back. We found a white cabinet with louvred wooden doors, and reckon we can varnish the doors darker for more of a Spanish look. They also had a better choice of tiles than I found in a lot of the DIY places. Not quite what I was hoping for, but way better than I'd feared we were restricted to. So, it looks like I might get that Spanish-influenced bathroom I was hoping for, albeit with some compromises.

At least I didn't have to compromise on flowers... 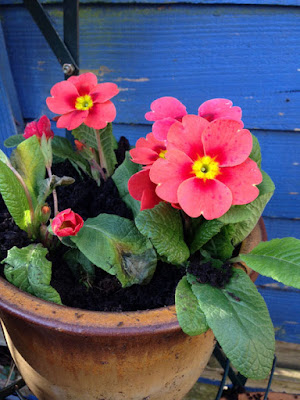 Have you had a good weekend?
Labels: aargh homewares