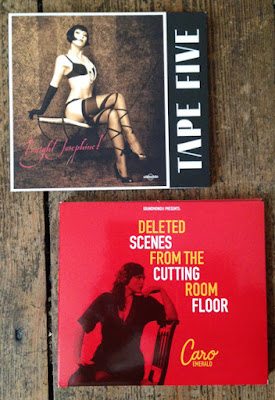 I added these to my Amazon wishlist after asking for recommendations for more stuff in a Caro Emerald vein (see my review of The Shocking Miss Emerald here). Tape Five was actually recommended by Amazon. Mr Robot bought both these CDs for me for my birthday. It's probably something that happens as you get older, but I honestly can't remember the last time I got a CD without knowing most of what was on it, which is a bit sad – when I was a teen I'd gleefully buy albums (on cassette!) and get to know them. Even a song that doesn't hook you in immediately can become one you love if you hear it regularly in an album context.

Depending on your perspective, Tonight Josephine is either more diverse or less focussed than either of the Caro Emerald CDs as it doesn't seem to settle on any one style. While several songs contain wonderful early jazz touches, little trumpet or clarinet licks straight out of the 1920s, and ragtime rhythms, some of it all gets far too 1980s for my liking, all a bit Miami Vice in its combination of electronic keyboards, brass and Latin beats. Possibly if you can't remember the 80s that seems quite cool, but I wasn't into that sound then and I'm in no hurry to listen to it now. So thumbs up to 'Madame Coquette', 'Pantaloons' and 'Bad Boy Good Man', thumbs down to 'Birds Like It' and 'Pousse L'Amour'.

Lyrically, Tonight Josephine is not particularly clever; this is definitely an album for dancing to more than listening. Deleted Scenes From The Cutting Room Floor, however, is rather wittier. It intrigued me when Cate mentioned it to me because there's a very unusual 1930s crime novel set in the world of British film called The Face on the Cutting Room Floor. I don't want to say too much about the book because I don't want to spoil it if you come across it, but it was postmodern before the term existed, and breaks several of the conventions of crime fiction. It was written by someone who worked in the film industry, so is worth reading for that insight too.

ANYWAY that's a book, not this album.

Some tracks aren't retro enough for me; 'Back It Up' makes me think of modern upbeat stuff like Beyoncé, especially with the backing singers singing 'I wanna' repeatedly. I guess the modern-feeling tracks might appeal more to people younger than me who've grown up with that sort of thing as the soundtrack to their lives, and it's not actually bad, it's just not my bag. And I don't react against them as strongly as I do to the 80s-esque tracks on Tonight Josephine.

However, some of the songs on Deleted Scenes are real gems, every bit as addictive as the standout ones from The Shocking Miss Emerald (from that one, 'Liquid Lunch' sticks in the brain like you would not believe). 'That Man' got me hooked from the first few notes – it makes me want to practice my charleston – while 'The Lipstick on His Collar' starts with a beat that makes me think of the harder 60s girl bands, the sort of thing that also influenced Amy Winehouse's Back To Black album. All in all I'm very pleased with Deleted Scenes From The Cutting Room Floor, and it makes a jolly good accompaniment on my morning pre-work walks.

(Re: gubbins in recent posts. I will have photos of my new Horrockses at some point, hopefully this weekend, but it's print deadline at work this week so I've been working into the evenings, and I'm now at the, "Is this clean? Looks like I'm wearing that!" stage. Normal service, and outfit photos, will resume once the mag has gone to press. For now, here's a horrible selfie...)