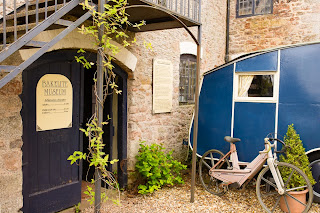 A couple of years ago I went on a photoshoot in Devon with work (holding reflectors and lugging bags of camera kit, obviously, not modelling) and we passed a sign for the Bakelite Museum. A Bakelite Museum? I had never heard of such a thing. Needless to say, it went on my list of places I wanted to go. The weather was changeable during our holiday in Devon last week, so on one of the wetter days we finally made the trip to the disused grain mill in Willerton where it is housed.

The Bakelite Museum is the accumulated belongings of a passionate collector and, I think, all the better for it. It wasn't assembled with a view to giving the public an education in the history of plastics, so you won't find wall charts explaining how they are made, timelines of plastic production or anything like that. There certainly aren't any animatronics, dressing up areas or any of that sort of malarkey. No, it is a collection of things amassed by someone who simply loves vintage plastics and the uses they were put to. I like that. It makes the displays more quirky.
The collection all started off with a single radio, and there's a really good collection of those. We both loved the art deco lines of the cases. The domestic side of things is where the museum really excels: along with the radios, there's a splendid array of televisions and clocks, and even plenty of ancient vacuum cleaners. Mr Robot was impressed with the 'rocket ship' lines of some of those. While most of the items are plastic and date from the 1920s to 1950s, there are also some ancient cookers and refrigerators, even a wooden Victorian refrigerator, and enamel fire guards. The way non-plastic domestic items came to be made in the bright colours of plastics was interesting, and it makes you realise how colourful an art deco home must have been.
I was especially taken with the Bakelite Vitascope 'rocking ship' clocks. Yes, clocks. I said the fact that it was a private collection made things more quirky, and repetition is one of the quirks. There are five of the Vitascope clocks, all on a display stand above a trio of teasmaids.
There are rows of eggcups, multiple toast racks, numerous cruet sets identical apart from colour, and a whole forest of darning mushrooms.
I counted 15 different picnic hampers throughout the museum, each one in a different colour. In a regular museum you'd just get one or two, with a card telling you something about the item, and that would be that. At the Bakelite museum you're able to contrast and compare many ones, and see how the outsides and contents could differ widely, though you'll have to guess at the age in many cases.
Among the stranger items there's a Bakelite coffin, and a display box of individual false teeth, presumably to help dentists order the right size and shape for any denture. We spent a little while speculating on a little cream box with a roll top; when you roll back the top half-a-dozen slender pieces pop out - it was a box for offering cigarettes to guests! A display of little powder scoops also got my attention, as I have never seen them mentioned in vintage magazines. How do you suppose they were used? My guess is to transfer the last little bit of powder from an old compact to a new one,  or from a tub to a pretty dressing table pot, preventing waste. There is also a display of rare Victorian plastics, though I admit to being most interested in the deco-era pieces.
One thing I was surprised at was the relatively small number of 'personal' plastic items on show. Buckles, buttons and jewellery are not especially well represented, which probably has a lot to do with the collection starting out with radios, but I would have expected a few more dressing table and shaving sets. That said, there's so much in the collection, I don't know where the owners would put them - perhaps they do have such things squirrelled away somewhere.
We really loved the museum, and had a marvellous cup of tea off vintage china in the tea room. However, I really don't think it's suitable for people with any sort of mobility problem as you use the original mill stairs to get to different levels of the museum. For the same reason, I wouldn't take young children who need pushchairs. I also wouldn't advise taking any children who are liable to run around and pick things up. Things are tightly packed and much of the collection is completely open, so you can get up extremely close (the rarer pieces are all safely behind glass), which is wonderfully trusting of the owners, and it would be a crying shame if anything accidentally got broken. On which note, if the owners aren't inside the mill you have to pay your £5 entry money at the tea room, and I suspect several of the people going round while we were there hadn't paid, which is really not on. It's a lovely place, and deserves to be visited and kept open.