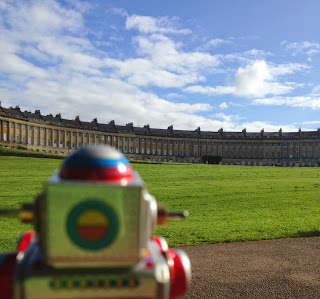 I mentioned in my 'Making do and mending' post that I planned to walk more and lay off the beer. And what do you know, I have actually managed to do both! The beer is the hard part; I like beer, and I like the warm friendliness of pubs. Pubs struggle nowadays, so I actually feel a bit guilty for not supporting my locals. I haven't given up beer totally, so maybe I'll allow myself a trip to the pub this weekend. The walking, however, has been easy. We drive in to Bath each day - it's cheaper than getting the train for two of us, and if we got the train we'd be at the mercy of Worst Late Western and their delays and cancellations - and so we drive in early in order to find a parking space. I start work at 9:30, so instead of coming into the office and bimbling around for ages, I've started taking a morning walk, fitting easy exercise into time that would otherwise be frittered away.

Bath is at its best first thing in the morning, I reckon. Actually, that's true of most cities. The busloads of tourists haven't arrived, so the pavements are fairly empty, and everything is fresh and just waking up, the shops and stalls are just opening and the council workers making everything clean and fresh for the new day. There are certainly worse places than Bath to go for a walk. I've got a walkmeter app on my phone so I can track my routes and see how much extra I've walked. One day I took my camera and toy robot with me and had a great time taking photos. That might sound odd, and it raised a few eyebrows with passers-by, but if the walking becomes a chore I'll stop doing it, so it's important to have fun at the same time. When you work in a place, you don't always look at it, and in plodding around the Royal Crescent, Circus, Pultney Bridge and other places I've rediscovered the city.

I've only been doing the morning walks/ less beer thing for a fortnight. I was going to write, 'it doesn't seem to have done anything other than make me hungry', but that's a fib as I haven't had any pain in my hips/lower back, so it's clearly keeping those mobile too. My husband reckons the extra mile I'm averaging each day should have an effect in the long run, so I'll stick with it and see if it does.

Anyone else enjoy cities first thing in the morning? 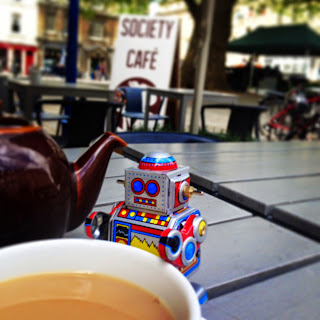