We may not be seeing it here in Blighty, but Agent Carter, Marvel's female-led 1940s-set TV series, has been renewed for a second season so it might be coming. Apparently it's already popular with cosplayers at SF and comic conventions in the US. Deprived as we are of one retro hero, here are five others who you can still enjoy in book, comic, film or radio form. 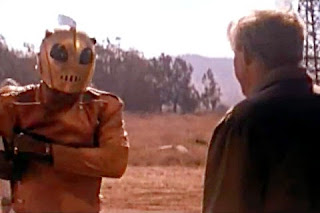 The Rocketeer
The Rocketeer isn't actually an old hero, but his creator, Dave Stevens, had a real love of Golden Age adventures, and wrote a comic that captures the very spirit of the period, without the decidedly dodgy attitudes towards women, gay people, people of colour and so on. Cliff Secord, the Rocketeer, is suitably all-American and decent, with entertaining sidekicks straight out of pulp stories.

The film is one of my absolute favourites, and I don't think Jennifer Connelly was ever more beautiful than she is as Jenny Blake in this one. It follows the first storyline from the comic pretty closely, though, as I mention in my post from 2012 about The Rocketeer, Betty (the Rocketeer’s girlfriend in the comic) was based strongly on Bettie Page, whereas Jenny Blake has more of a 40s look. Billy Campbell makes a good Cliff, and Timothy Dalton is fantastic as big-screen idol and rotter Neville Sinclair. If you’ve never seen it, it’s a fab family film, with nothing to scare children too badly, and a wonderful moderne look.

Indiana Jones
I adore the Indiana Jones trilogy*. Like Dave Stevens, Indy’s creator George Lucas had a passion for pulp adventures; you can see it in the original Star Wars, and it comes out even more strongly in the 1930s-set Indy films. The hero with a double life - half respectable, half adventure - is something everyone who’s ever paid even the vaguest bit of attention to comics will be familiar with, and it’s to Harrison Ford’s credit that he’s able to be convincing as both the nerdy professor and the whip-cracking adventurer. Like the Rocketeer, he has a good selection of suitably amusing sidekicks such as Sallah and Marcus Brody, and is regularly accompanied by ladies more than capable of holding their own.

I think it’s hard to think of many opening sequences more iconic than that of Raiders of the Lost Ark. The obstacles in the ruins, the rolling ball, and that theme tune! Oh, that theme tune. I doubt I need to tell you much about the films, but Indy had to feature on this list.

Doc Savage
We're going really old-school here as the Doc made his debut in the 1930s. Doc doesn't actually have any superpowers, but has been raised to be strong and daring, and with his five friends rights wrongs, living in a skyscraper flat funded by a gold mine given to him by grateful Mayans.

Now, anyone with even the vaguest liking for pulp adventures will know of Doc Savage, he’s one of the genre’s most iconic figures and featured in novels, comics and even radio plays. DC brought back the character in comics in 2010, written by Paul Malmont (writer of the fantastic The Chinatown Death Cloud Peril). However, there’s only been one film to date, made in the 1970s. Mr Robot and I have a sneaking fondness for it. It knows it’s a bad film, and is very tongue-in-cheek. The theme tune, sung by a group of men to the tune of a Souza march, pokes fun at heroics as it celebrates them, and characters comment on ridiculous turns of events as you, the viewer, will be thinking how silly it all is. I suspect most people will hate it, but as I say, we have a certain affection for it.

There are rumours that a new Doc Savage film is planned, and that Chris ‘Thor’ Hemsworth is wanted for the title role. You cannot begin to imagine how excited I am about this one. 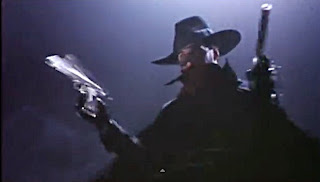 The Shadow
Who knows what evil lurks in the hearts of men? The Shadow knows.

Ah, The Shadow. You can’t mention the Doc without mentioning the Shadow, the other really great 1930s pulp creation. Unusually, his debut was on the radio, entering print for the first time nearly a year later. Unlike all the other lead characters on my list, he’s more of an antihero, with several aliases, and is aided by a number of agents and reformed ne’er-do-wells. In case you’re wondering, yes The Shadow stories were an influence on the creators of Batman. Alan Moore has also stated The Shadow influenced the character of V (as in ‘For Vendetta’).

From the late 1930s to the mid-1950s there was a Shadow radio drama in the US, with The Shadow voiced by Orson Welles. If you get the chance to listen to them, I recommend them. They’re really enjoyable to listen to in the car or before dropping off to sleep. A series of films was made in the same period, the first two starring a silent star with a name that belongs on a burlesque stage: Rod la Rocque. (And that was a shortened version of his real name!) Alec Baldwin starred in the 1990s film, but I’d say that’s one for lovers of adventure stories only. I'll watch it if it's on, but it's not a great favourite. Go for the radio shows, if you can get them.

Flash Gordon
You’re probably thinking of the ultra-camp 1980 film, or its Queen theme tune right now. However, Flash started in comics in 1934, and lasted all the way into the 21st century in that form, making him possibly the most durable of our retro heroes.
If you’re old enough, you might remember episodes from the 1930s film series being shown on kids’ TV in Britain. Mr Robot had nightmares about the lobster creatures from one episode as a boy, so I did what any caring wife would do and bought them for him on DVD. They’re still nasty!

There is something wonderfully appealing about the 1980 film, and I don’t just mean Ornella Muti as the superlatively sexy Princess Aura, though I suspect Mr Robot would cheerfully watch her simply reading a shopping list. It’s just stuffed with silliness, from fights on a rotating platform covered in spikes to a harem of sparkly-shouldered concubines to the immortal line, “Flash, I love you, but we only have fourteen hours to save the Earth!” and Brian Blessed bellowing all over the place.

SyFy made a Flash Gordon TV series not long of go but please, for the love of anything you care to name, do not watch it. It is one of the worst things I have ever seen, and I watched Sharknado (verdict: not as good as Avalanche Sharks).  Stick with the 1930s serials or the 1980 film.

Anyway, those are my five retro heroes. Have I missed one of your favourites? And if you also have a secret liking for the Doc Savage film, I’d love to know!


*There is no Crystal Skull. I refuse to acknowledge its existence. George Lucas, stop making great things and then muffing them up again.
Labels: comics film heroes pulp radio