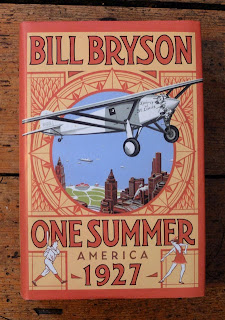 Mr Robot and I went to a talk on One Summer when it was first released and bought our (signed!) copy then, and I'm ashamed to say it's taken me this long to get around to reading it. Once I started, I really enjoyed it.

The title is accurate: it is literally the story of the summer of 1927 in the United States. However, as Billy Bryson said, so much happened that year. The big events, and the one his narrative is centred on, are Charles Lindbergh becoming the first person to fly across the Atlantic non-stop, and Babe Ruth setting his incredible record of 60 baseball home runs in a season. So much else happened that year, too, though: there was horrific flooding in the southern US, which Herbert Hoover oversaw the relief effort on, The Jazz Singer was released (which changed cinema forever), Al Capone's criminal career was at its peak, and many other things.


Having individuals at the core of things really helps the structure of the book. History never really has a beginning or end, and in covering all the major events of a few months, plus digressions into connected past and future events, it would be easy for the reader to get lost. If you've ever read anything by Bill Bryson, you'll know that he loves to pass on fascinating facts and interesting side notes, which might add to the distraction. Happily, the stories of Ruth and Lindbergh carry you through.

I really felt I got a sense of the era from this book. The 1920s always seems very recent, the first really 'modern' decade, but One Summer brought home how great the gulf actually is. Plenty of facts surprised me: how much more advanced Europe was than the US when it came to aviation, and how far behind when it came to automobiles. How rudimentary the US road network was, and how strong its dependence on rail. The stories about anarchist bomb plots in the US in the first quarter of the 20th century surprised me, those about eugenics theories and the treatment of African-Americans greatly saddened me and made me realised how much we need to learn from history.

One Summer is a great read. I think anyone interested in the history of the Jazz Age will enjoy it. Bryson's tone is friendly and informal enough for it to feel really readable, as though a knowledgeable friend is enthusing at you, while it's rammed with facts and statistics. I'd say it's a book for both genders too; while it's got an aviator and a baseball player at its core, it won't overwhelm you with blokiness, as the digressions and anecdotes provide plenty of extra meat.

Because it focusses on the headline-grabbing events in America in 1927, it doesn't provide a good overview of what things were like for African-Americans and other minority communities – that I think says more about what was making the news at that time than Bryson's choices; Bryson does talk about how things like the Mississippi flood disproportionately affected African-Americans and caused migration to other parts of the US. Likewise, things happening in the rest of the world are only mentioned where they touch on the US - but that's why the book has 'America' in its title. I really enjoyed this book, and felt I learned a great deal from it.
Labels: 1920s books