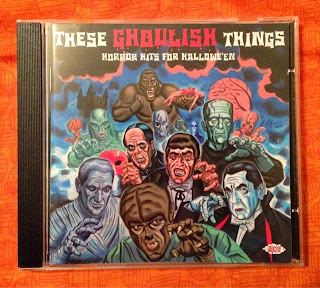 I know from my Twitter and blog feeds that I'm not alone in my love of Hallowe'en as well as vintage. This CD, which I bought from the CD stall at this year's Vintage Nostalgia show, has been on constant play on my iPod since this weekend, and if you're looking for something to play at a Halloween party I definitely recommend it.

Almost all the tracks on These Ghoulish Things were originally released between 1957 and 1965. The exceptions are some radio plugs Bobby 'Boris' Pickett did for Monster Mash, which sound as though they were actually made when the record was released in 1962, and Nightmare Mash by Billy Lee Riley, which is a midcentury recording that was never released. (To be honest, it's such an obvious ripoff of Monster Mash I'm not surprised.)

Aside from Monster Mash, and poppy versions of the theme tunes to The Munsters (by Milton DeLugg and the All-Stars) and The Addams Family (by The Fiends), my favourite tracks are Mr Were-Wolf by The Kac-Ties and The Voo Doo Walk by Sonny Richard's Panics. Not counting the radio promos there are 25 tracks. I'm not sure what you'd call the style of most of them - doo wop? R and B? Great midcentury party music, at any rate.

The packaging is super too: the disc cover is a little booklet with notes on many of the songs, plus reproductions of adverts, film posters and the like from the era, and shots of some of the artists. if you too like a bit of horror with your vintage, you'll love this. It's still available from Play.com and Amazon, so you should be able to get it in time for a weekend party. (I get nothing from those links; they're just there to be helpful.)