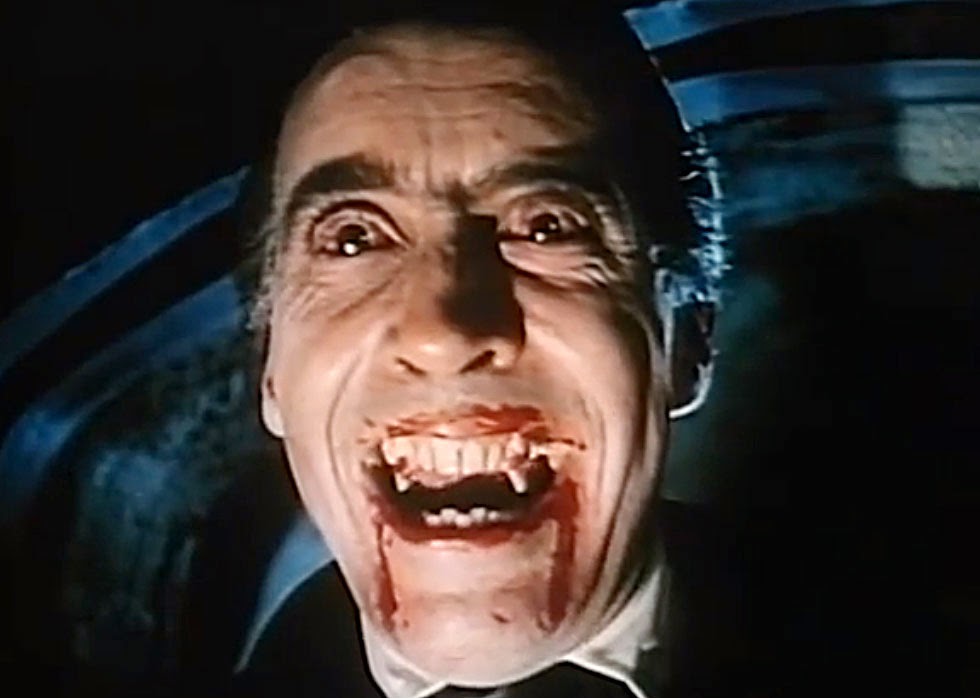 In my review of the British Library's Gothic Imagination exhibition, I said I'd let you know when the corresponding Gothic programmes started on the BBC. Well, they've clearly put sod-all effort into forward publicity, because it starts tonight! (Seriously, why do they plan such good programmes and then not let people know the broadcast dates more than a week in advance?!)

So, while they might be a bit awful at putting out the schedules, here is one I've put together, for your delectation. Please note that not all schedules are complete yet, so I will update the list as more information becomes available.

The Horror of Dracula
BBC4, 10pm
The Hammer film that spawned a legend, starring Christopher Lee and this month's Bloofer Gent, Peter Cushing. Put aside your preconceptions and love it!


Tue 21 October
Dan Cruickshank and the Family that Built Gothic Britain
BBC4, 9pm (repeated 27 October, 11:20pm)
From St Pancras Station to the Albert Memorial to the red telephone box, the Scotts designed some of Britain's most iconic structures. This documentary explores the legacy of three generations of extraordinary architects.

The Life and Loves of a She-Devil - episode 1
BBC4, 10pm
When Ruth's husband is unfaithful, she discovers hidden powers. Hell hath no fury...

Supernatural: Dorabella
BBC4, 11pm
Not the Sam'n'Dean Supernatural, but an episode of a 1970s series of Victorian spooky stories. In this one, a young man has a close brush with a vampire...


Sun 26 October
The Castle of Otranto
Radio 4 Extra, 1:30pm, repeated 27 October at 3:30am)
Horace Walpole's 1764 novel, considered the first in the Gothic genre, is broadcast for radio.


Mon 27 October
Inside the Castle of Otranto
Radio 4 Extra, 6:30am (repeated 1:30pm and 8:30pm)
Rory McGrath looks at Walpole's fictional castle and the origins of Gothic fiction.

The Art of Gothic: Britain's Midnight Hour - episode 2, 'The City and the Soul'
BBC4, 9pm (repeated 28 October at 2:40am and 30 October at 10:30pm)
Exploring how Gothic, the industrial revolution and urban growth collided.

The Curse of Frankenstein
BBC4, 10pm
Revel in Peter Cushing's elegant performance as the Baron, and Christopher Lee as the Creature.


Tue 28 October
Architects of the Divine: The First Gothic Age
BBC4, 9pm
Dr Janina Ramirez looks at the development of the Perpendicular style, Britain's own peculiar form of Gothic architecture, in the 14th century.

The Life and Loves of a She-Devil - episode 2
BBC4, 10pm
Ruth's pursuit of vengeance continues.

Supernatural: Night of the Marionettes
BBC4, 11pm
Not the Sam'n'Dean Supernatural, but an episode of a 1970s series of Victorian spooky stories. In this one, a man visit the place where Frankenstein was written. (I'm a little confused by the write-up here, as the BBC says 'the castle', but Mary Shelley had her original idea at the Villa Diodati, as any fule kno...)


Fri 31 October
Goth at the BBC
BBC4, 10pm
A compilation of goth performances from the BBC's archives of musical programmes.
I am so looking forward to this one, which should include material by The Cure, Siouxie and the Sisters of Mercy.


Mon 3 November
The Art of Gothic: Britain's Midnight Hour - episode 3
BBC4, 9pm
There's no official confirmation of this episode yet, but based on the previous two weeks' schedules I'd bet the final episode will be broadcast today, and that it'll be about literature and the later Gothic.


Tue 4 November
The Life and Loves of a She-Devil - episode 3
BBC4, 10pm
Not officially confirmed yet, but based on the schedules released so far, I anticipate this being the broadcast date.

Tue 11 November
The Life and Loves of a She-Devil - episode 4
BBC4, 10pm
Not officially confirmed yet, but based on the schedules released so far, I anticipate this being the broadcast date.