The look of Crimes of Passion, episodes 5 and 6 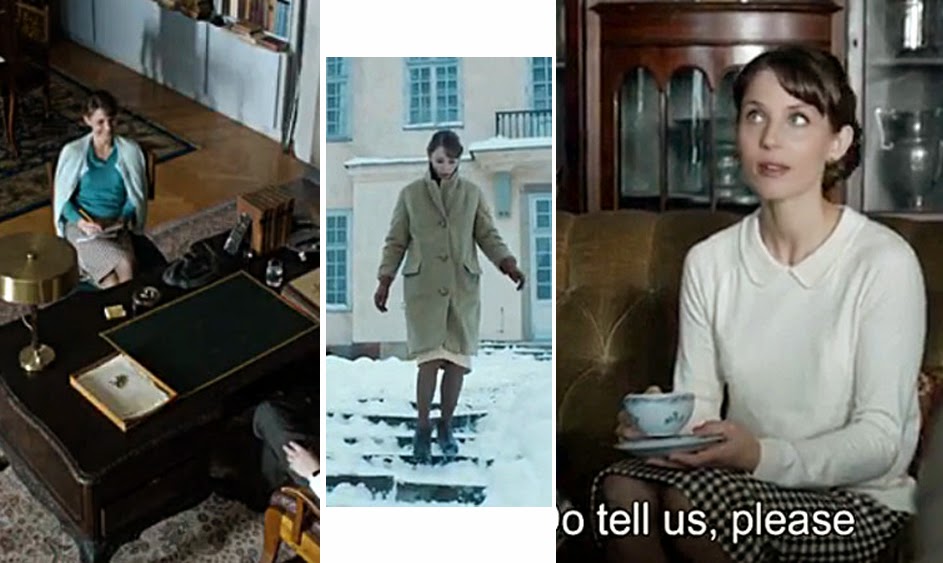 Yes, you read that correctly. In Episode 5, 'Dangerous Dreams', Puck goes to work as secretary for a Nobel-prize-winning author, and presumably has to adhere to conventional standards for professional ladies' clothes, because she wears skirts. They do suit her very well. She retains plenty of her practicality, however: when the family she is staying with are all dressed up for dinner, Puck is in a plain white shirt and beige pencil skirt. When everyone's sitting down at the table, this brings her visually in line with the men at the table, rather than the women. For episode 6, 'Tragedy in a Country Churchyard', she is free of the constraints of her job and returns to trousers, though they are looser than her lightweight, summery cropped ones from earlier episodes.

I found 'Dangerous Dreams' visually interesting, because it's set in the middle of winter so you get some gorgeous views of frozen landscapes, and inside the house you get the impression of coldness too. (The series as a whole has made a transition from Midsummer to New Year.) You'd expect more knitwear, but there's very little: Puck's knitted top with the peter pan collar makes a reappearance, but aside from that, heavy winter coats and woven scarves seem to be the main concession the characters make to the season. While you can presume the house is well heated and that's why the characters are all able to wear fairly lightweight clothing, it still makes you, the viewer, feel slightly chilly.
'Tragedy in a Country Churchyard' also has a winter setting, but the abundance of beautiful knitwear, from the men's colourwork tank tops, to Puck's superb yoked woollies, gives everything a cosy feel. Isn't it funny how seeing people in warm clothes makes the episode seem that much warmer?
I mentioned in my previous review that there has to be a bombshell in these programmes. Well, at first the closest there seems to be is Bjorg, the mother, who's a little old for the part but is clinging defiantly to the days when she was a successful and glamorous actress, donning a fuchsia satin wrap and diamond earrings for a family dinner. Her daughter Ylva and daughter-in-law Helene both also dress up, but it's not to the same level.
Once Christer comes on the scene, Ylva turns up the glam. Her horrible father is awful about her splendid black dinner outfit, but at the end she waltzes off arm-in-arm with Christer. She's wearing another suit, but whereas her dark red one was boxy and serviceable, the fitted skirt and peplum jacket on her blue one are really rather saucy. After Lou (episode 3) and Helene (episode 4), it has to be said that Christer is rather good at finding himself girlfriends on murder cases... 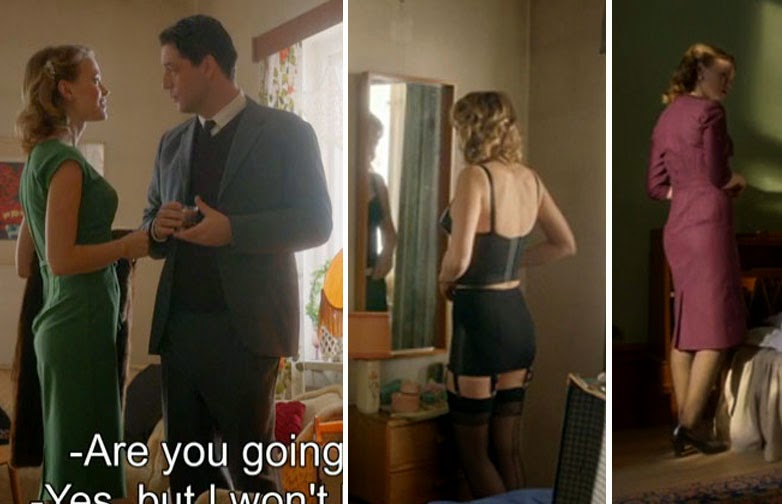 Barbara, in 'Tragedy in a Country Churchyard' is an out-and-out vamp, and gets nowhere with Christer - he knows her game. We first see her in a tight fitting green number (it's Stop Staring's 'Timeless' dress in green), and even get to see her in her racy black underpinnings. Pretty much everything Barbara wears is tight, with the exception of her silky floral dressing gown, which she's not averse to wearing around men. Whereas the other characters wear sensible coats and woolly scarves, Barbara wears furs in the snow.

I did find it interesting that of all the characters in 'Tragedy in a Country Churchyard', the only one who also wore pearls and furs was Tekla, the straightlaced matriarch. Barbara may be using her looks to get ahead, but what she aspires to is Tekla's levels of independence and comfort. 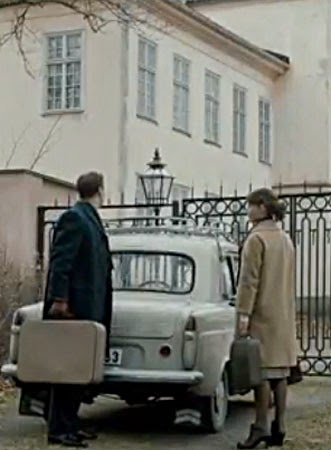 After he plumbed the depths of nerdiness in episode 4, Einar completely redeems himself in 'Dangerous Dreams'. Though, dare I say it, he's beginning to dress a bit more like Christer. Just as Puck's clothes show her independence and free spirit, Einar's development does hint at the problems he's experiencing with his marriage, and he's morphing into what he thinks she wants. Still, it's not a bad look. It's interesting how of all three main characters, he's the one whose life seems to be changing the most, even as Puck and Christer seem pretty much the same. 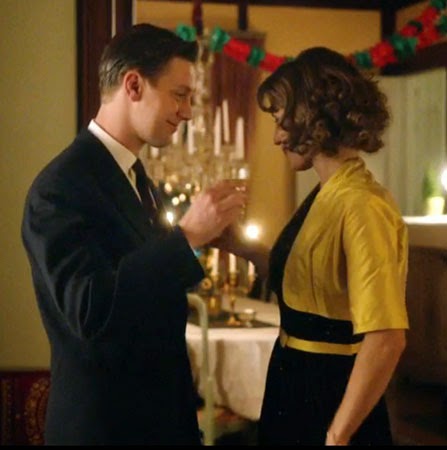 And one final treat to finish off with, just because I couldn't leave it out - how cool is the hairdressing salon in episode 6? Look at those atomic cover-ups and pastel do-rags. Do want. 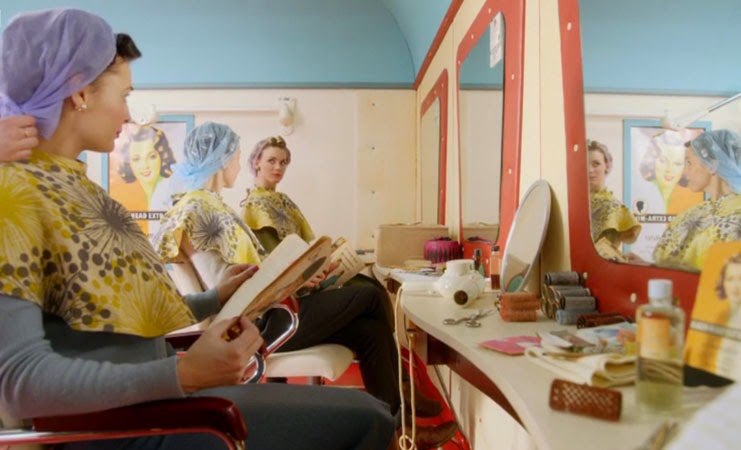 Want more? I've also written up the outfits from episodes 1 and 2 and episodes 3 and 4 of Crimes of Passion.
Labels: clothing costumes crime television