Haxan: Witchcraft Through the Ages [film, 1922] 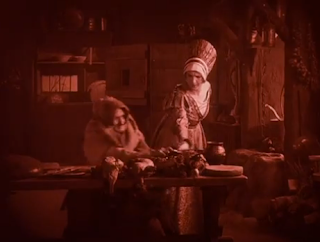 It's October, and what does that mean? A month packed with things spooky, kooky and altogether, erm, vintage!

Haxan is a Swedish silent film with a good reputation, but it wasn't entirely what I'd expected. I'd anticipated a series of stories about witchcraft in different eras, and to a degree that's what it is, but it's a documentary with dramatic scenes rather than a succession of mini dramas akin to a portmanteau horror film. Benjamin Christensen based the film on his readings of historical books.

The first 15 minutes is composed of intertitles detailing the history of belief in demons - a very potted one - and historic woodcuts and engravings, with very little in the way of movement. If you like your silents fast-paced and jazzy, you may struggle to get through this bit. It moves on to the Middle Ages (1488, to be precise) and shows an elderly lady making potions. The bulk of the film is set in this one period, and discusses how lonely, marginalised old women were likely to be accused of being witches, and how after one accusation, a whole succession of accusations would inevitably follow. The dramatic pieces are beautifully shot, with detailed, yet obviously flat, sets lending a dreamlike quality to some scenes. 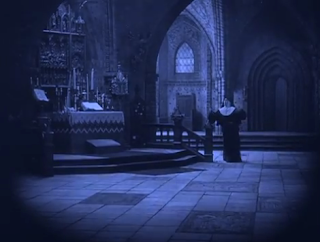 As modern as its approach to superstition might sound, where the film shows its age, is in its comparison between those accused of witchcraft, and early 20th century diagnoses of hysteria, comparing the modern sleepwalker to the medieval 'witch' who claimed the devil made her do things, for example. While those accused of witchcraft were the least powerful people in their societies, lacking money, youth and masculinity, the film doesn't really explore the fact that the women were likely to have been the ultimate victims of society's fears and anxieties. No, according to early 20th century theories it's all the fault of their own wandering wombs, the silly creatures! (Never mind that men were also accused of witchcraft and no-one ever suggests their nuts travelled round their bodies.)

Haxan is a long film, and while interesting, and while some of the film is very beautiful to look at, I think you probably have to be into silents, feminism or the history of portrayals of witchcraft to enjoy it. It's more a film for academics than one to watch purely for pleasure.
Labels: 1920s film silent