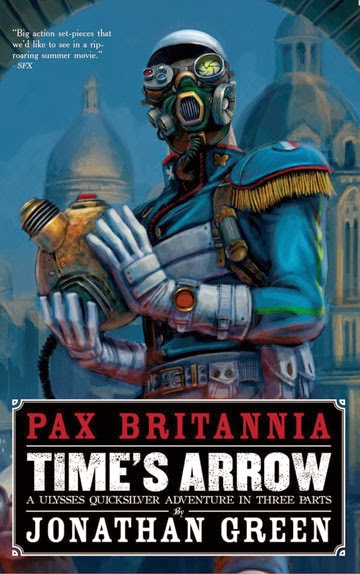 You could be forgiven for thinking Jonathan Green is one of my favourite writers as I've reviewed more books by him than by any other author on this blog. I've reviewed three of Green's other 'Pax Britannia' novels with their dashing dandy hero Ulysses Quicksilver: Blood Royal, Dark Side and Anno Frankenstein. I said in my review of the latter that it showed a lightness of touch not evident in the earlier novels. Time's Arrow shows a similar playfulness, while returning to the more Victorian setting of the ones before Anno Frankenstein. I really do think it's the strongest book in the series so far. I don't think Green is one of my favourite writers yet, but if he carries on writing like this he'll definitely be on my must-read list.


It's almost strange that this book hangs together so well. I felt that Blood Royal felt like a series of set pieces and didn't quite gel. Time's Arrow was written as a e-book in three parts, and after the conclusion of the first and second part Green got his readers to vote for how they wanted the tale to continue, yet it's much more coherent as a narrative. Perhaps I felt one or two characters who popped up in the first part disappeared rather too abruptly from the story later on - in most novels, if a writer spends time developing a character you expect them to be more significant in the tale - but that's undoubtedly a side-effect of the way the story developed according to the readers' wishes.

I mean it - read on at your peril.

So, in Anno Frankenstein Ulysses was sent back in time as his enemy, Daniel Dashwood, tried to alter the timeline of world events. Time's Arrow sees him catapulted back to just before the events in Dark Side - but in Paris. Keen to prevent the events of Dark Side and Anno Frankenstein ever even occurring, Ulysses needs to get back across the channel. Unfortunately he landed in a garret alongside a murder victim, and the Parisian police have made him their number-one suspect, which means Ulysses has to lead them to the real murderer before he can return to London to save himself.

Green's books have always been action-packed, and this one is no exception, with plenty of chase sequences. Steampunk often references the real world; alternate realities need an actual reality to hang off. Green also nods cheekily at popular culture in this book. Certain things are predictable: the ancestry of the villains, the nature of the actual killer and so on, and there's a point where you'll anticipate a bit of King Kong in the ending, and you'll be right. However, you might not accept how that film is used, nor the cheeky nod to a classic videogame in one chase sequence.

I really enjoyed this novel, and I'm glad I kept up with the series. Like the others I've reviewed, this one was given to me in a clear-out at work, but if I have to buy the next one from a bookshop, I'll cheerfully hand over the dough. It's worth it.