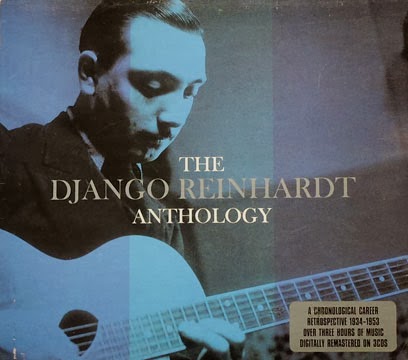 Can anything sound more French than Django Reinhardt’s music? Edith Piaf, possibly, but her songs are nowhere near as relaxing as Django’s Romany jazz guitar, especially when combined with the sound of a violin (during the 1930s and 1940s Django Reinhardt and Stephane Grapelli worked together). Reinhardt was actually Belgian, but he spent the bulk of his performing life in France, Paris in particular.

The Anthology is perfectly Gallic. Whatever ‘your France’ is, whether it’s a beach in Brittany, a café on Paris’ Left Bank, stuffing yourself with food in Lyon or driving along the golden Mediterranean coast, this CD will take you there. You can imagine Bogart’s Rick listening to it in a smoky Parisian nightclub, though the truth is even better: one of the places Reinhardt and Grapelli played together was an exclusive salon; other attendees included Josephine Baker and Le Corbusier. I like to listen to it at work, which is considerably less glam or French, but the strange lively-yet-laid-back quality of the music certainly helps the day pass pleasantly.

Reinhardt died in his early 40s, in the early 1950s, and so while his style developed over his lifetime, the swinging style of jazz predominated and the whole album has a consistent, rather than evolving, feel. His guitar playing could be sparse, perhaps a necessity after he lost the use of two fingers in a terrible fire, but I love the strong, plucked rhythms he produced. My favourite tracks are 'Sweet Sue', 'Minor Swing', 'Sweet Georgia Brown', and 'Dinah'. (I also like 'Tears' because Professor Elemental has clearly sampled another version of the tune for his track 'Sweet Cold Collation' on his album The Indifference Engine, and thinking of the Prof’s music is guaranteed to make me smile!)