I HAVE FINISHED KNITTING THE INFERNAL CARDIGAN 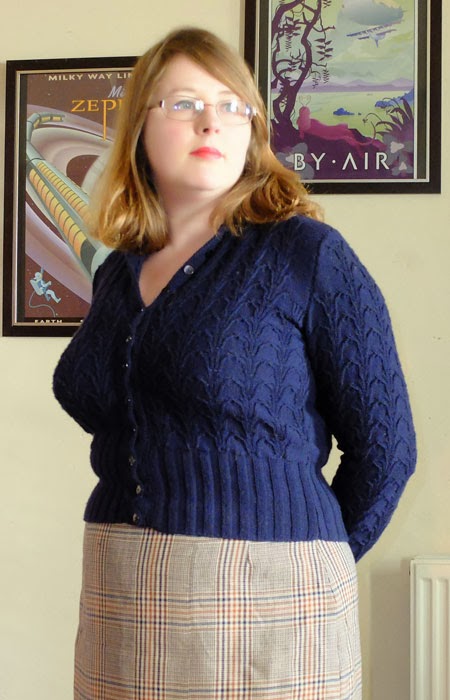 This is also a photo from my first-ever go at selfies. It took some faffing, but I managed to get one where the lighting and focus were both okay so you can see the stitch pattern. Actually posing nicely is something that can wait for another day.

I had to resize this pattern as it was originally written for just one size, rather smaller than me. It could do with being a tiny bit larger, but I can get into it.

Things I learned
1: A selvedge stitch is good
A selvedge stitch is where you slip the first stitch in every row. It creates a chain-like line of double-height stitches up the edge of the knitting, and makes sewing up so much easier it's untrue. I anticipated the pieces being tricky to sew together (small stitches, dark wool) but mattress stitch made it a doddle.

2: Making-up pins are also good
I usually spend ages attaching and reattaching sleeves because I get bits bunched up all over the place. This time I had a set of bamboo making-up pins that were given away free with Simply Knitting to hold everything in place, and they made fitting the sleeves really quick and easy. With those and the selvedge stitch, making the cardigan up was no trouble at all.

The original design buttoned up all the way to the collar, and I have worked the buttonholes and sewn on buttons right to the top, but I don't think it looks so good on me done up completely. I've got a big bust, which sits lower than a smaller cup size does, and done up there just seems to be acres of knitting between the shoulder and the apex of the bust, which isn't flattering, so I shall stick to wearing it as a V-neck. I like the way it looks with my beige/orange/navy Prince of Wales check skirt. I'd thought as I was working on it that the two would look good together, and they do!

I'd like to thank Tasha of By Gum, By Golly for organising the Knit For Victory knitalong, and all the members of the KFV Ravelry group. My cardigan would probably still be languishing on the needles without them!
Labels: 1940s craft knitting outfit post