What really struck me was how many of the knits were slightly out of date for the early 1950s. For example, in episodes 1 and 2 Lizzie wore a beautiful fair isle jumper – but with its yoke and square sleeves, it was the sort of garment women would have been wearing five to ten years earlier. She wore an all-over fair isle cardigan in episode 4, again gorgeous but not on trend. 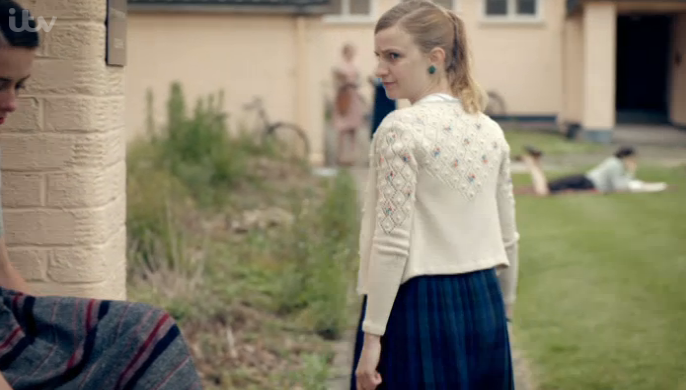 Her most up to date knit, however, was an embroidered and bobbled one she wore later in episode 4.

Susan’s husband’s jumpers and tank tops would have been a little unfashionable in the 1950s, when men’s patterned knits often involved fewer colours, but as a civil servant he's probably not allowed to be too dashing! 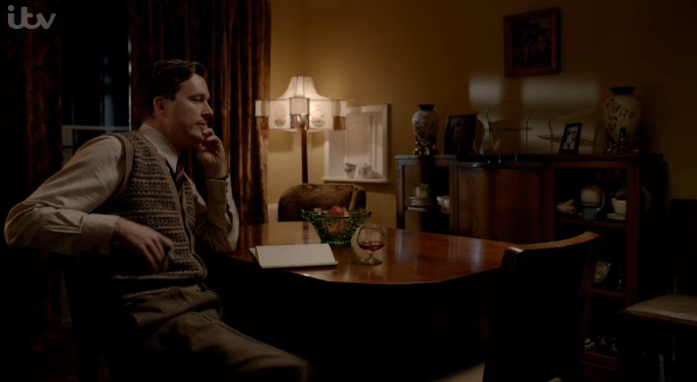 The third and fourth episode felt more up to date, as far as clothes go (though I found the storyline horribly anachronistic, like they’d taken a 21st century issue and put it in fancy dress).

However, even when the knitwear designs weren’t obviously out of date, they lacked the up-to-the minute touches such as raglan or dolman sleeves that would have made them ‘very 50s’, and they’re not in the bright colours or strong patterns that lit up the post-rationing years either. Not a stripe in sight! And stripes were popular in knitwear. There is also none of the thicker jackets and chunkier designs of the era.

I know people had to make their clothes last a long time, and so they would keep wearing things for years, but you’d expect things to look a little more fashionable, even if it was just thanks to a few additions. I’d be interested to know if the other clothes in the programme struck people as similarly too-dated-for-1953. Do you think they were just very bland?

In my programme review, I commented that both Foyles War and The Bletchley Circle lack the optimism of the 1950s, and the costumes, too, lack exuberance and optimism. This was probably deliberate, to help maintain an overall feeling of gloom. For example, I did wonder if the costume designer chose Alice’s sad grey prison cardigan, with its figure-swamping size and sad dropped shoulders, to emphasise the bleakness of her situation. Susan’s beige knits befit a woman who is doing her best to live a bland life rather than the intellectually stimulating one she craves. However, it is a pity. Characters in The Hour wore much brighter clothing but there was still plenty of menace in the storyline and Bel’s pencil dresses and Marnie’s wide skirts didn’t distract from that.