Over the weekend, Mr Robot and I had fantastic fun camping at the Vintage Nostalgia Show in Stockton, Wiltshire. I first saw it mentioned in a tweet by Shona from Heyday, and thought I might be able to talk the Mr into going down for a day, but he liked the idea of camping, so we bought a tent and camping stove and decided to go for the whole weekend. I'm not sure how many years the show has been running; I get the impression that it's relatively new but growing.

We arrived on Friday night straight from work. We were put in the general camping field - not sure how you get into the vintage camping as it seemed to contain modern tents and vehicles, so I'll investigate that for next year. As we set up our tent, we could hear jazz and swing drifting across from the main marquee. After that, we got ready for the evening. Himself wore a black shirt, waistcoat and jeans, while I changed into my 1930s-style Able Grable Miss M. I'd been out on a photo and videoshoot for work that day and so was a bit sunburned, and the high neck and puff sleeves covered up the burns nicely.

When we arrived at the Ringwood Brewery bar right by the marquee, I felt both over- and early-dressed as people didn't seem to be dressed up, and those who were wearing vintage tended to dress 40s-60s, but a strawberry daiquiri followed by some beers soon took the awkward feeling away...

There were some smashing-looking people, including a very beautiful young lady with hair the colour of strawberry icecream who was wearing a yellow 60s (I think!) frock, another lady in a jade-green-with-white-dots pencil skirt and matching top, and a chap in his late teens or early 20s with perfect 50s hair, turned-up jeans... the complete James Dean package. ("I want to be him!" declared the Mr.)

Sticky Toffee Jazz were performing that evening (I say 'were'; it was one lady plus backing tracks, but she had a lovely voice), plus there was burlesque from Killer Heels, and a DJ to end the night. The music seemed to creep slowly through the decades, so while it started out around the 40s, by the end of the evening it had passed through the 50s and was finishing with a bit of soul.

Busy Saturday
The next day was the big day. The weather down here in Wiltshire's been atrocious all week, so I was prepared for a damp and gloomy weekend. BIG MISTAKE. I'd planned to wear a wool tartan skirt with my blue late 40s/early 50s jumper, and that would've looked nicely midcentury without being fussy. However, the sun was blazing all day, leaving me with no choice but to pair said skirt with a vest top, showing off Friday's glowing photoshoot sunburn, and then everyone else seemed to have decided to dress up with furs, full skirts, updos, the works, leaving me massively underdone. Mr Robot had a loud, fun shirt with a hotdog print all over – actually from Tesco, but it fitted in nicely.

We started off Saturday looking at the vintage vehicles, and there were some real beauties. I adored the cute frog-eyed Sprite. There isn't a car that looks cuter or happier! We were really impressed to see an Austin Six, as you often see Sevens (there were a few on show) but you rarely see Sixes. A late 1920s Buick, complete with wooden wheels, caught my eye, while my husband decided he liked any car as long as it was 50s and two-tone.

We were having fun trying to choose our favourite car, and then we saw IT. The car with everything. A silvery Chevrolet Fleetline, with immaculate chrome details. It looked fast without even moving, space age despite being a classic vehicle. It was fantastic. It was like something out of a comic book. That said, the cars and motorbikes were all wonderful. It was a real treat to see them, and their owners clearly love and care for them. There seemed to be groups of specific cars, and lots of gorgeous teardrop trailers (the tiniest, cutest caravans ever!), so I guess a few classic car clubs attended.


There was a really good selection of stalls, with lots of great clothing, and some very nice handbags. There was plenty for the gents, too, which is always nice to see. We didn't buy anything as we hadn't really taken enough cash, but next year I will definitely take more money, and I picked up some business cards for stalls that had especially nice stock as I'll want to look them up in future. Heyday's stuff was even nicer in reality than it is online; I've bought a couple of things from there and have been considering other items but wasn't sure about the prints, and this event helped me make a decision or two...

There was also a hairstyling stall run by Vintage Hair Lounge, with a group of ladies doing updos and makeup. It was very busy – I booked before noon and got an appointment for 4:30 – but it was well worth the wait. Stylist Gemma turned my shabby, overgrown bob into an amazing beehive, and all around me other stylists were working equal amounts of magic on other visitors.

People watching was great fun. Attendees dressed up with varying degrees of authenticity – quite a few women paired full-skirted 50s-style dresses with 40s-style Victory rolls, for example, which may not have been period-accurate but looked fab. There was a general midcentury feel. Chaps seemed to wear anything from tweed suits to military uniform to retro-style car club jackets with jeans. One lady dressed Audrey Hepburn-style, in a 60s shift dress with big sunglasses, while we both adored the toddler running round in his dungarees and flat cap. Thumbs up, too, to the boys dressed in vintage boy scout uniforms, who looked fantastic. We did a fair bit of dog watching too; the Vintage Nostalgia Show is a pooch-friendly event so lots of people brought their pets. My favourite was a longhaired Akita, which has to be the most fantastic dog I've ever seen. I want one. It'll look great in a Chevrolet Fleetliner...


For the evening Mr Robot wore a grey suit with his fedora, and I wore my ivy 'Vivienne' dress from Fever with my 1950s atomic diamante jewellery. We wear these things to work, but people seemed to like them! It's always when you make the least effort that people like your clothes... The Roadhouse Roosters were the first act on, and they were great fun, with a very traditional 1950s sound that got people dancing. I loved the second group, The Obscuritones. They had a nicely dirty 50s-60s sound, just rough and edgy enough. Both acts were let down by the sound system, which was a tad ropy, but the evening was thoroughly enjoyable nonetheless, and as before took a slow DJ-driven trip towards the 1960s before ending.

We didn't see the whole of the Sunday, just taking a quick whizz around the site and seeing the new cars before packing up our tent and heading home. But we'll definitely be going back next year.

Good things!
The music, the stalls, the excellent choice of food at decent prices, the funfair for the kids (lots of families were on site, and it was wonderful to see so many children having a great time and not being bored stuck doing grownup things – if you've got kids, this is a fantastic event to bring them to), the cars, the weather, the fact that the portaloos stayed usable throughout...

Not so good things! (But nothing was actually bad)
The sound system could have been better.
Because it's in a field, if you have mobility problems it would be worth contacting the organisers, I reckon – we wouldn't have been able to get the mother-in-law's lightweight scooter round, but heavier ones and wheelchairs seemed to get round okay.

Lessons learned
Take lots of wet wipes (I did), and always have a 'pocket pack' of tissues in your bag.
It's in a field, so don't wear your best shoes. A little cowpat goes a long way!
Take clothes for bad weather and for good.
Take plenty of cash. If you don't spend it on clothes, CDs or homewares, the cocktail bar will take care of it for you! 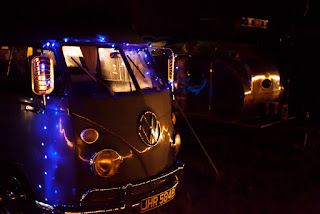