"What Every Woman Should Know" 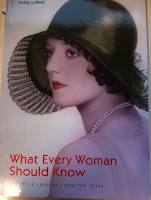 I know, I know. Don’t read the Daily Fail, online or off, it just encourages them. But when I saw What Every Woman Should Know I couldn’t resist it – I’d gone into WH Smiths in Bath to buy the February copy of Vogue (no, no idea why I wanted it so badly) but saw this and bought it instead. After mentioning it on Twitter it turned out Gemma from Retro Chick also owns a copy, and a few other people were thinking of buying it, so it’s not just me lured in by the promise of 1930s fashion and trends.

The paper quality - both pages and cover - of this is very nice, definitely more akin to a proper book than a magazine. It falls into that odd space we in the mag trade call ‘bookazines’, with minimal adverts and high quality paper stock, but you’ll find it stacked alongside the magazines and newspapers, not with the novels. Often bookazines are a sort of ‘best of’ of other publications, so you’ll see ones on a year in sport, or a particular celebrity. This is all women’s interest material from the Daily Mail in the 1930s.

I do own a couple of hardback books containing reproduced articles from Good Housekeeping in the 1920s-40s, and comparing the two was interesting. I get the feeling both were aimed at a similar demographic; certainly there’s not a massive difference between the fashions and recipes presented in 1930s Good Housekeeping and 1930s Daily Mail. What is different is the tone, with headlines like ‘Wear This If You Are Thin’ and ‘What You Can Do With Salmon’. It’s more prescriptive, and possibly less practical, as GH also covered things like mortgages and what to look for when buying a house.

While the articles are interesting in themselves, I wish more care had been taken over the details when the bookazine was put together. The different colour tones of the extracts help identify them as separate, rather than leading you to expect to read them all in succession, allowing you to dip in and out, and a conscious design decision could well have been made not to make the reproduced documents uniform in tone. However, there’s no indication of the date when any of the articles were published – the shifting clothing styles suggest they’ve been jumbled up, not printed in chronological order. This may well be why I found the recipes more interesting than the articles on fashion; fashion went through very clear, sharp changes in the 1930s and it makes no sense to me to mix them up.

As well as facsimile extracts, there are reproductions of photos, presumably copied from actual photos or negatives rather than the pages of the paper as the sharpness is rather better. There are lots of very appealing pictures without captions: no indication of who the photo is of, when it was taken, or why it is being presented. Is it an aristocratic beauty? A fashion shot? Why are the shots placed alongside each other? Who knows. You could say that this is part of the nature of the bookazine, that they are more ephemeral and aren’t meant to be on sale as long as books, but I’ve seen many bookazines made with much more attention to detail. I'd also bet a couple of the shots are actually from the 1920s, because the hats and clothing looks wrong for the 30s, even the very early 30s. The real killer is that most of photos get repeated. Really! In a volume this size! I can't believe the Mail had so few usable photos from the 1930s on file, so this is shoddy in the extreme.

What Every Woman Should Know is still a nice thing to own, and if you’re going on a train journey or flight and love vintage, you’ll probably get more out of this than you would out of a modern glossy magazine, for not much more money. Enjoy it as a piece of fluff though: look elsewhere for serious information on fashion and lifestyle in the 1930s.
Labels: 1930s magazines