The soundtrack to the midcentury cocktail party of your dreams 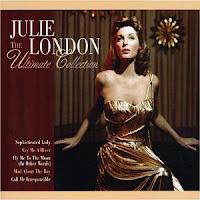 Julie London was one of the biggest stars of the 1950s, but I have to confess I only really knew her breathy, sultry voice from her most famous song, ‘Cry Me a River’. I really wanted to hear some more of her recordings, though. Mr Robot got me this three-CD set for Christmas, and it’s perfect.

‘The Ultimate Collection’ is a cherrypicked collection of Julie’s versions of well-known songs, all recorded in the 1950s and 1960s, including ‘Diamonds Are A Girl’s Best Friend’, ‘One For My Baby’, ‘S'Wonderful’, ‘Blue Moon’ and ‘Sophisticated Lady’. (On a slightly smutty note, do you ever wonder if the line from ‘My Heart Belongs to Daddy’, “If I invite a boy some night to dine on my fine Finnan haddie” is a euphemism? Perhaps it’s just me being mucky.) There’s a brilliant version of ‘Fly Me To The Moon’, faster than the well-known Sinatra version. Julie’s rendition of ‘Let There Be Love’, which I always associate with Harry Connick Jr, is also faster than more familiar versions. By contrast, ‘Mad About the Boy’ is less powerful, with a different rhythm to the famous Dinah Washington recording, closer to the original 1930s song.

A bit of annoying organ does creep into the more syncopated 1960s stuff: ‘Our Day Will Come’ suffers from this a little, while ‘You Made Me Love You’ and ‘Baby Won’t You Please Come Home’ feature both a plinky organ and energetic piece of trumpet playing that fight with Julie’s voice, although it’s worst on the latter track. ‘You Made Me Love You’ is a 1990s digital remastering, and I do wonder if they reduced the impact of the organ and trumpet during the remastering. While she is capable of singing with a degree of strength, Julie London is no Shirley Bassey, and the more gung-ho arrangements aren’t as satisfying as the laid-back ones. They’re by no means bad, though, and there isn’t a duff track on the three CDs in the box.

Despite its lack of oomph, Julie London has a great voice. Her diction is crisp, you you never miss a word, and she’s note-perfect. The airy arrangements don’t overwhelm her smoky delivery. Perhaps it’s the softness in her voice that makes London’s singing so attractive: while you can sit back and admire the power in the voices of Frank Sinatra, Dean Martin, Ella Fitzgerald and Dinah Washington, you feel the need to move closer to Julie, so as not to miss out on anything.

If I had to criticise the songs for anything it would be that they’re all very romantic and done in very conventional ways, with no playing with lyrics, speed or suchlike... but that’s actually what I like about this set. ‘The Ultimate Collection’ is a collection of absolute classics, done in a poised, sultry, lightly jazzy fashion – elegantly grown up, for men and women, not for boys and girls. The soundtrack to the midcentury cocktail party of your dreams.
Labels: 1950s 1960s Music