Sexton Blake: The Eight Swords and Other Stories 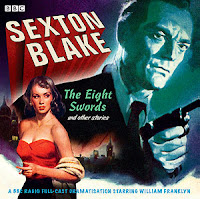 It's shameful of me, I know, but I hadn't heard of Sexton Blake before Mr Robot bought me a couple of CDs for Christmas. Why shameful? Well, the first Sexton Blake story came out in the 1890s, a series of books was written about him over 50 years (and writers included John Creasey and Michael Moorcock; not small names), there were annuals, comic strips, silent films (DO WANT!), sound films and radio. Oh, and an ITV television series. Consider me thoroughly ashamed.

The Eight Swords and Other Stories consists of four episodes of the radio programme originally broadcast in 1967, and feature Blake, his assistant Tinker and secretary Paula solving some very bizarre mysteries, mostly murders. (The 'Other Stories' are 'A Murder of Crows', 'Double and Out' and 'You Must Be Joking'.) My immediate reaction was that the programme falls somewhere between Dick Barton, with a dashing, upright, hero, and some sidekicks, and The Saint, with an obvious problem to be solved as well as a good dollop of action. However, I didn't feel Sexton Blake had the roguish charm of Simon Templar or the all-action quality of Barton, and Tinker and Paula aren't as much fun as Jock and Snowey. Despite that, the plots of the episodes, while occasionally silly, are enjoyable and will keep you listening.

The theme music is very 1960s, but apart from the occasional reference to miniskirts, most of the stories could be set at any time at all from the 1930s to 1960s. The episode that is most of its time – and my favourite – is 'Double and Out', in which Blake helps to foil the escape of a double-agent caught spying for the others. (I should mention that Blake butts heads with Chinese intelligence in this story, and so atrocious 'Chinese' accents are present.)

The CD also includes an episode from 1930, one of the oldest surviving British radio drama recordings. The sound quality is pretty poor, but that's to be expected in something so old. There's no Paula, only Tinker, to assist Blake, and Blake is more like the Sherlock Holmes type of detective in this episode than the urbane man of action. The contrast is intriguing, and makes me want to explore more of the Blake back catalogue in all its forms.


Like the sound of that? I have also reviewed...
Dick Barton (1970s TV series on DVD)
Dick Barton: The Paris Adventure (1949 Australian radio broadcasts on the radio)
Send for Paul Temple (1946 film on DVD)
Calling Paul Temple (1948 film on DVD)
Paul Temple Returns (aka Bombay Waterfront) (1952 film on DVD)
Or just click on the 'derring-do' tag below or in the right-hand sidebar.
Labels: 1930s 1960s crime derring-do radio spy