A slow start to the year

A slow start to the year 2013’s started fairly slowly. I mentioned my new year’s resolution was to finish at least one knitted thing a month –well, I’ve managed this month’s knits, but as they’re neither vintage nor retro-futuristic, I shall not trouble you with them here! Since then I’ve been ploughing on with a very plain pair of socks for Mr Robot, which probably could count as reproduction in the sense that they’re plain socks, the likes of which gents have been wearing for donkeys’ years.

As far as telly goes, I’m still mostly enjoying Ripper Street. My problems with it have more to do with the predictable plots than the extreme violence, but that’s possibly symptomatic of the writers trying to fit a whole story into each episode. I still haven’t seen Mr Selfridge, but keep meaning to get round to watching it on catch-up. 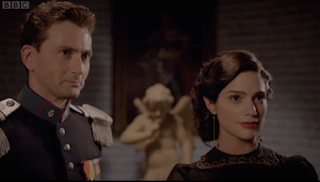 If I could have one telly wish, it’s that The Killing could influence programme-makers to spend more time on one story. Spies of Warsaw was done over two episodes, and I liked that very much indeed. David Tennant’s character, Jean-Francois Mercier, was a spy working for the French in Poland, investigating Nazi tank activity. It became especially poignant when he was arguing that it looked as though the Germans planned to invade via the Maginot Line – something that, in real life, came to pass. I preferred the spying side of the story to the romance between Jean-Francois and beautiful left-wing Polish aristo Anna (Janet Montgomery). That said, she did have some very nice jumpers, which made me think it was time to get those socks finished so I can renew work on the navy cardigan. And I’ve never been a David Tennant fan, but he had a certain resemblance to a young Peter Capaldi, which changed my opinion of him rather…

In radio news, one of my favourite radio programmes, the silly-scary 1930s-set The Scarifyers is now back on Radio 4 Extra on Sundays, hurrah! I’d thought we were due for more of that, and now Lionheart and Dunning are indeed back.

You can catch up with Ripper Street, Spies of Warsaw and The Scarifyers on BBC iPlayer.

The BBC does have a 1930s-set drama by Steven Poliakoff coming up, Dancing on the Edge (starting on the 4th of February. I’m not completely excited about that: I adored Shooting the Past (broadcast back in 1999) but some of his other work has disappointed me rather, in particular Glorious 39. However, his programmes and films usually look beautiful, so I shall definitely watch an episode or two.

In other news, I’m supposed to be going husky mushing later this week, weather permitting. (The dogs won’t mind a bit of snow, but getting to them could prove tricky.) I have the world’s uglist mismatched nylon separates to wear, and shall post a photo so you can have a good laugh!
Labels: 1930s television Victoriana