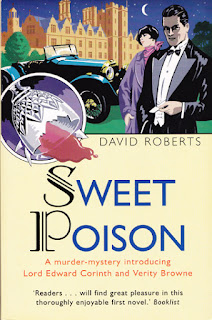 These two novels are the first and second in a series of ten about Lord Edward Corinth and Verity Browne. While set in 1935 and 1936 respectively, they were published in the 21st century. (Historical detective fiction had a real 'moment' about a decade ago, although of late it's been the modern, more hardboiled Scandinavian fiction that's been en vogue in crime fiction.)

Sweet Poison introduces both main characters: Edward is driving to the family home, Mersham Castle, where his brother, the Duke of Mersham, is having a dinner with the aim of furthering the cause of peace in Europe. Verity, who works for the Daily Worker, a Communist publication, is also visiting the castle pretending to be a journalist from Country Life with the real aim of writing an exposé on how the aristocracy live. Then one of the guests, a well-respected old soldier, dies of potassium cyanide poisoning...

In Bones of the Buried, Verity is writing for both the Daily Worker and the more mainstream New Gazette from Spain. When her former lover is accused of murder, she asks Edward for help.

The main problem I have with these books, which I do actually enjoy, is the one I have with most fiction written after the era in which it was set – the writer has to set the scene. All the things that Dorothy L Sayers or Agatha Christie could expect their readers to know and take for granted needs more explanation, and the writer refers to things very stereotypically of the era. Roberts does spend a lot of time 'scene painting' and referring to things a modern reader might know. In Sweet Poison, for example, Verity goes out in a Schiaparelli dress, rather than a more obscure but equally authentic label such as Roecliff and Chapman. Ben Belasco in Bones of the Buried is clearly a Hemingway-alike. Roberts has done a lot of research but it does give things the feeling of a costume drama. And despite all this careful scene setting, there is a massive flaw in one part of the storyline in Bones of the Buried. In 1917, one female character is a film star with a son at Eton. Later it's said that her husband met her in Hollywood. However, that would mean somehow an English girl was in Hollywood before the movies even started there, and that she was a major star at a point when the harsh lights needed for filming meant actresses had a very short working life because ageing skin showed up so clearly on screen. (Sticking black gauze over the lens was a later development.) It's not crucial to the plot that she's a film star and it simply doesn't work, whereas as a stage actress it would have made more sense.

I'm not going to pretend these books are high art, and I'm always going to prefer Dorothy L Sayers or Agatha Christie, or even Freeman Wills Croft, to them. But there is a finite number of books by those writers, and Roberts' books are fun, even if Corinth and Browne do come up as Wimsey and Vane-lite in their sparring. My assessment? One for secondhand or Kindle purchase. If I can get a cheap secondhand copy of the ones in the series that I'm missing, I will, otherwise I'll get them digitally so they don't take up more of my limited shelf space. Make of that what you will!
Labels: 1930s books crime