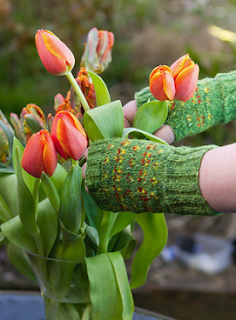 These fair isle fingerless mitts are a project I designed recently. I don't talk about it much on this blog as it's not relevant to the Robot, but I'm a big fan of Jim Butcher's Harry Dresden novels. I based a Harry Dresden swap parcel on the Winter and Summer faerie courts in the books, and the mitts were the big part of the Summer half.
I've promised the pattern to my friends over at The Making Spot (it should go up as a free knitting pattern), so I need to get into gear, type it up and hand it over! Want to knit your own fascinator? One of my other designs, a fascinator and matching gloves knitted in a silk/viscose yarn, is on sale over there.
I'm still working on that gold 1950s jumper. I had to reknit the front and back as my tension was so disastrously out, and the back is now complete. I suspect when it's finished, I'll be sick of the sight of it and not want to wear it!

Another 1930s beret from A Stitch in Time Volume 2 is also on the needles. It's mostly in the same shade of blue as the first one I made, but with a red band and I'll make red bows for it too.
Both jumper and beret have been temporarily sidetracked by a shabby chic design I'm doing for Simply Knitting. I can't say too much about it, but it should be in print in the next couple of months and then I can talk about it in more depth!
Labels: 1930s 1950s accessories knitting Mai Trumpet I Bloez It