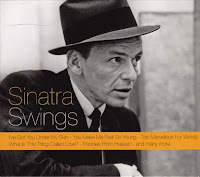 This CD is a combination of Frank Sinatra's 1956 album Songs for Swingin' Lovers and nine from 1955's In the Wee Small Hours. The songs don't follow the original albums' track listing, which has both good and bad points: In the Wee Small Hours was developed as a concept album of sorts, but it's quite a blue album, and as not all the songs are used, the ones that are may as well be jumped up through the more upbeat tracks from Songs for Swingin' Lovers. It stops there being a big melancholy chunk all at once.
I bought this as a gift for Mr Robot, whose tastes are a little later than mine – as far as popular music goes, I go forwards from the 1920s, he comes back from the 1960s, and occasionally we meet in the middle! (After 1969 I'm afraid it's rock, goth and indie almost all the way, with a couple of exceptions.) But now I'm rambling. I thought this would be right up Mr Robot's street, but he usually plays his CDs in the car and finds it a little downbeat. Possibly the Wee Small Hours songs are responsible for that. I listen to my iPod at work, and Sinatra Swings is actually very good when you're trying to block out general office sounds and want something smooth.
My favourite songs on it are 'I've Got You Under My Skin' and 'Anything Goes' – well, you can't go wrong with Cole Porter, can you?
I think if you like Sinatra, you're probably better off collecting the individual albums as he was a man who thought carefully about how his records were put together. This isn't a bad CD, combining songs from one-and-a-bit of the man's best albums, but the running order seems a little bizarre. Get 'em the way the man intended, as two separate ones.
Labels: 1950s Music