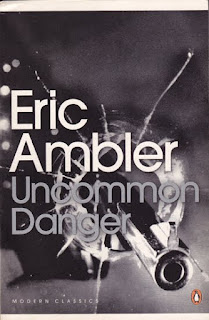 A 1930s spy novel, this, and a really gripping one. Most writers seem to focus on the Cold War nowadays as a background for espionage stories. (Even William Boyd's new Bond novel will be set in the 1960s.) It's certainly a fruitful source, but I do love ones between the wars. More importantly, I love spy stories set and written between the wars. Uncommon Danger was Eric Ambler's first 'straight' espionage story, his first novel having been a spoof of the genre (which a lot of people took seriously!).

It's the mid 1930s, and freelance, Europe-based journalist Desmond d'Esterre Kenton has lost all his money in a game of poker dice, and so hops on the train to see if he can borrow some money from a Jewish friend who he helped escape to Vienna. On the train is a nervous little man who claims to be Jewish and asks Kenton if he'll take a package, which he claims contains bonds, through the border checkpoint for him, in exchange for a large sum of cash. Kenton agrees, and when he's done it successfully the man, made even more nervous by the presence of a shifty-looking chap on the train, asks Kenton to take it all the way to Linz and deliver it to him at a hotel there. Kenton, intrigued, agrees. Of course, the man isn't Jewish, the package doesn't contain bonds, and when Kenton arrives at the hotel the man is dead and he is in a whole heap of trouble.


I really enjoyed this novel. A lot has been made of Ambler's left-wing bias, but while I found he displayed a degree of naivety towards the Russian state, it makes a refreshing change after the number of right-biassed stories I've read from the era. Moreover, I found it genuinely exciting. Modern spy stories, with the exception of John le Carré's ones, seem to focus on increasing amounts of sex, explosions and general nonsense to create excitement. Ambler can put you on edge just describing a man trying to tunnel under a fence! I think it's because he goes into detail, so you really get to know Kenton and share his anxieties and uncertainties.

Like pre-Cold War spy stories? Radio 4 Extra occasionally broadcasts Eric Ambler stories, and while none of those are on the schedule, they are broadcasting Somerset Maugham's Edwardian spy tale Ashenden, Gentleman Spy next week.