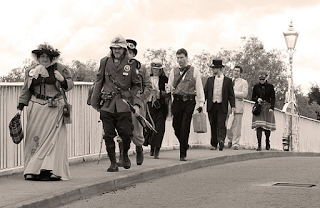 Steampunk festival Waltz on the Wye is fast approaching and I am so excited! It's a little over a month away now. Mr Robot is once again official event photographer, and he's got loads of new kit for the modern setup (he bought a fantastic new lens last week), plus we'll be giving the Voigtlaender an outing. James Richardson-Brown and Arfon Jones are going to be releasing their new book, Life of the Air Kraken at the event (written by James, illustrated by Arfon), and I have to go to that!

I'm an 'urchin' (crew for the event). In my case this means being photographer's assistant for the ball, watching over the Contraptions Exhibition for a session on Sunday morning, and giving a talk on Victorian and Steampunk knitting after that. I've already started prepping my talk, and I've got a design to finish for work and then I can move on to knitting my samples for the talk. (Note to self: knit faster!) 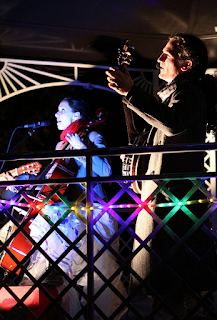 I've got most of my outfits sorted. I'm going dieselpunk rather than steampunk – think between-the-wars science fiction rather than Victorian – and have planned one outfit each for the Friday and Sunday, and a day outfit for the Saturday plus my ball dress. The Saturday is looking like being all Able Grable, all day, as I'm planning to wear my Miss M for daytime and a Dream Girl 1932 for evening. I don't think I've ever planned so many outfits, not even back when I went to the Whitby Goth Festival! (And believe me, I knew people then who would take suitcases full of clothes for that weekender.) The thing I'm coming unstuck on is hats. I'm probably going to have to order a few bases from MacCulloch and Wallis and trim them myself. I'd meant to drop into their shop when I was in London and buy some, but now it looks like I'll have to suck it up and pay the postal costs. (Ow, ow, ow.)

Anyway, enough of my witterings: Jarkman has revealed one of the things he's made for the Contraptions Exhibition, so feast your eyes on this incredible steampunk pocket watch. One of the things I really admire about steampunks is the way they make beautiful, functional, enduring things. This is real craft.

Images: copyright PP Gettins
Top: The Expedition to England, part of last year's event.
Bottom: Pocketwatch playing on the bandstand at last year's event. They're playing at the ball this year, and I will be abandoning my photographer's assistant duties for their set. They play strange, beautiful music with twisted lyrics. I loved the song 'It Ain't So Bad' about poor Lucy, who survived by eating rats until she ended up in the place where all the rats lived...
Labels: clothing dieselpunk events photography steampunk