Ah yes, Make Nine. I suppose I should do a run-down of last year’s nine before kicking off this year’s…

Well, I completed two off the list – the Sorbetto and the skirt. Both got a few wears; they're perfectly functional though I can already see how I'd make them differently if I reused the patterns. I also finished knitting the jacket, but I’m not happy with the bobbly edging at the back of the neck, so I’m going to have to partially detach it from the knitted body, rip it back and reknit it shorter. That’s going to be a massive faff and I’m not looking forward to it at all, which is why I'm procrastinating, but I know from past experience that if I’m not happy with something I’ve made it never gets worn, so I’ve got to do it. Arrrrrrrrrse!


Two out of five’s pretty bad, eh? But wait! I did make a few other things last year that weren't on my list. Two sleeveless shirts, which were among my most-worn tops of the year, and the mock-up of a shirt for Pete using an old duvet cover. I’ll turn the mock-up into a pyjama top for myself (waste not, want not), and am now working on a proper one for Pete – that's the burgundy fabric in the photo below. I also made cushion covers from some beautiful hand-loomed silk we bought in India, and as a sadder make, some crocheted flowers as an online friend died and her family asked for crocheted flowers that they could put on her coffin and then make into a memorial blanket. My year hasn’t been completely devoid of crafting, then. 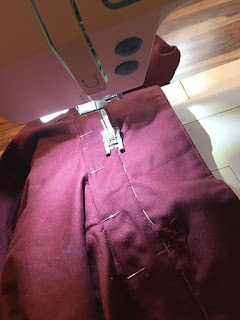 Yes, four of those are from last year. The '60s fabric' is vague, but what I make will depend on the cloth I use. I already have patterns for everything else on the list – in the case of the sleeveless shirt and 8246 skirt, I already have fully adapted patterns. And, of course, I want to complete my Clever With Colour and Pete’s shirt. 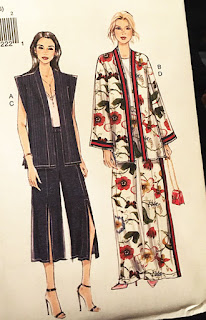 I don’t actually mind not completing the nine. It’s more something I use to encourage myself than a hard-and-fast list. If I manage nine, it’ll be great. If I only manage three, and three other unlisted things, that’ll still be great. Nothing on the list involves the beautiful velvet Pete bought me for Christmas; I want to take my time and find the right pattern for that one.