Something old, something new

In my last post but one I mentioned buying some new things. Here's the cord mini skirt. (Sorry the photo's so bad; there's not enough light in my living room for good pictures on my phone. I must charge my camera battery!) I bought it hoping the skirt would give my wardrobe more of a 60s feel – if you look at photos of girls just going about their business in the 60s, basic mini skirts are pretty commonplace. It buttons down the front. Possibly it's neither A-line enough nor short enough to achieve the desired effect, but it's comfortable and is wearable for work.


The top is one from Boden that I've had for absolutely years. I keep looking on Ebay as they had dresses in a similar, but larger-scale design. I'm sure one will pop up sooner or later. (I'm still kicking myself for not buying one when they were on sale on the site; I thought 'I won't want two things with such similar patterns on' – well yes, I do.)

I know a lot of bloggers have been talking about wearing 100% secondhand outfits on Instagram and that does make me feel a bit defensive. However, it's important for us to acknowledge that some body types are harder to dress vintage/secondhand than others – not just plus sizes like me, where choice is more limited, but people much taller/shorter than average, or with physical conditions that mean they're not an average shape. None of the people I follow would ever want to make people feel bad, but I do want to keep stating that simple fact. 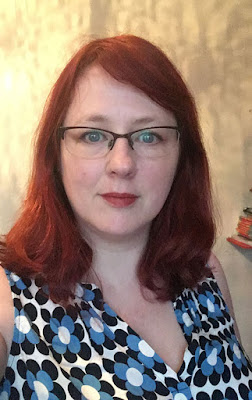 Anyway, I don't have a problem with buying new if it's done thoughtfully – good quality, with some thought about the clothing's possible supply chain, and not bought to wear once or twice and then dispose of. (Just before Christmas The Guardian had an article stating one in five people would only wear their Christmas outfits once – and don't even get me started on the plastic tat that is the Christmas jumper.) I know my skirt will go with many things already in my wardrobe, and is the sort of basic that will get worn frequently.

That said, I do want to work more of a flavour of vintage into my wardrobe again. I'm back on MyFitnessPal, counting the calories, and now December's out of the way I've got a clearer head and am taking joy in clothing once more. I didn't gain as much Christmas weight as I have in previous years, and have decided to accept some seasonal fluctuation as normal; the trick is to keep lowering my winter peaks! I've bought some vintage fabric on Etsy; if the readymade stuff won't fit, I can make myself some vintage-style pieces in authentic prints.
Labels: clothing