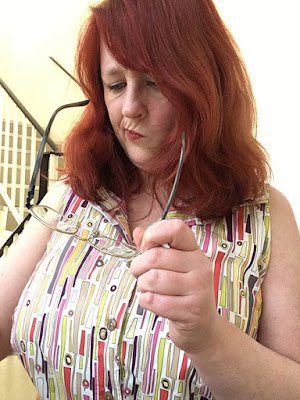 Argh, I talked this one up! In my last post I mentioned not having a problem with buying stuff new… well, Thursday’s eye test introduced a problem. My eyes have declined with every test so I fully expected to need to fork out £75-£100 for new glasses. BUT NO. They’ve hit the point where I need varifocals, and those aren’t cheap. To be fair to Specsavers, they do sell much cheaper lenses than the £189 ones I’m probably going to get, but the ones I’m considering are optimised for screen use. I work on a computer for eight hours a day and have screen-based hobbies like gaming and blogging, so it makes sense to fork out a bit extra to really look after my eyes. In all, my glasses look like costing over £300. Owwww.

Anyway, that means it’s a good job I’m getting back in the sewing habit and rediscovering the neglected clothes in my wardrobe because there aren’t going to be any more new ones for a while. Browsing the chazzas will still be an option, but other than that I’ll have to make do with the fabric in my stash and the clothes I have.

Here’s a couple of this week’s looks, modelled in the stairwell at work – yes, I do need to sort my photography out. First is an olive houndstooth skirt and olive top with black tights and Clarks Hamble Oak shoes, and a necklace of (I think) agates bought in Burma. The skirt was a charity shop purchase, and the St Michael label inside says it’s copyright 1997, so that’s pretty clear dating. If you class the 90s as vintage, I guess this is vintage. Not that it feels like it to me. I’ve been shying away from wearing it with black tights, but this week it struck me that we wore black tights with everything in the 90s, so why not with a 90s skirt now? In a way I’m breaking my rule of ‘never wear anything you’re old enough to have worn the first time round’, but 1) we’ve all agreed clothing rules are silly and for breaking, right? and 2) even if I steer away from 1990s clothes, it’s pretty obvious I’m in my 40s, so why worry about it? 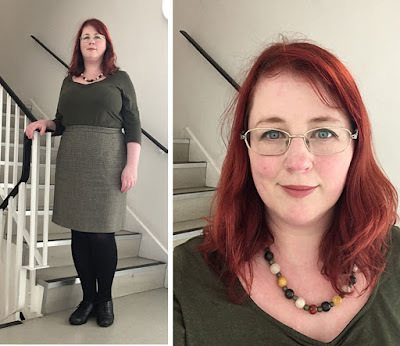 The second look is a little less dressy, because it’s from eye test day, and like an idiot I booked my eye test for 8:30, which meant getting a 7:45 train from Trowbridge, so an outfit with limited fuss was called for. 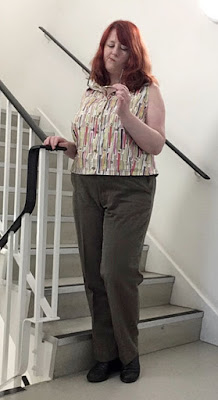 It’s one of my me-made shirts, brown tweed trousers from the menswear department at Marks and Spencer, a red cardi from a charity shop, and those black shoes again. I actually like them so much I bought another pair, though I’m currently in the old ones to give my feet a rest from breaking shoes in. I love this shirt, but always wear it with these trousers, and I’ve been looking at all the colours in it thinking of other things I could wear it with. I don’t really have much else, so that’ll be something to look out for in chazzas. I’d like a skirt in aubergine, mustard or slate to go with this and my lime green loafers.

Anyway, I hope your week’s going well and you don’t get hit with any unexpectedly high bills!
Labels: 1990s accessories clothing