The oldest tavern in England? 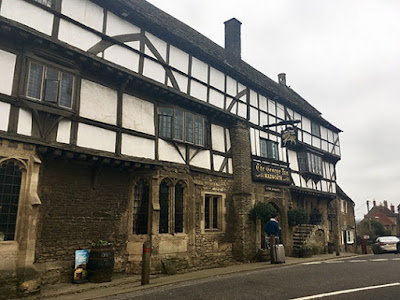 There's a question mark at the end of the title because no-one's sure which ancient tavern is actually the oldest, but the George at Norton St Philip is a strong contender. It was built in the 14th or 15th century – well, what's a hundred years? When it was renovated in the 1990s testing of the roof timbers showed they were from the 1430s, so it's at least that old. And it is jolly pretty!


Its history isn't entirely pretty. In 1685 the people of the West Country revolted in support of the Duke of Monmouth against James II, and the George served as the rebels' headquarters for a brief period. When the rebellion was quelled, it also served as a courthouse where the infamous Judge Jefferies oversaw the trials of some of the rebels. A dozen people were executed on the village common. 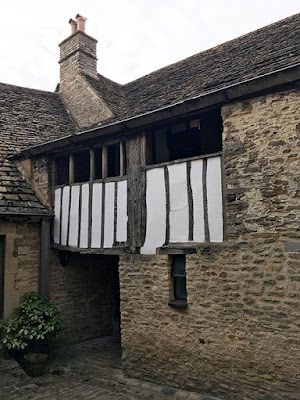 Anyway, nowadays you can go there for a pint or a meal or even to stay the night without fear of running into rebels, royalists or hanging judges. We went yesterday for lunch with a friend to celebrate his 40th birthday. It was just us, his wife and toddler and him. Like an idiot I didn't get any photos of the bar at the front of the pub, which feels properly ancient. In most British pubs there's usually some sort of structure above the bar – generally used for holding spare pint glasses or what have you. The George doesn't have that, possibly because the ceiling in that room is so high, and it gives the place a more open, but much older, feel. In case you're wondering about the beer, the pub is owned by Wadworth, a brewery in Devizes. It's nice to know the place is still in local hands, selling a relatively local brew. 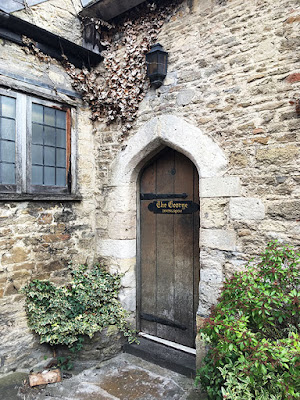 We ate in the dining room at the back of the building. I'm not sure what the rooms were originally, but as the tavern served as a wool store as well as somewhere for merchants and traders to spend the night, perhaps it was where the wool was kept. It's very cosy, and you can see lots of original features, though there are some kitsch touches around the place such as photos of medieval paintings, and lots of tapestry upholstery. (They even had 'Greensleeves' playing over the music system at one point, just in case people forgot the building they were in was very, very old.) I guess I'm spoiled by driving past the place every day, whereas plenty of tourists will love the olde England aspect. 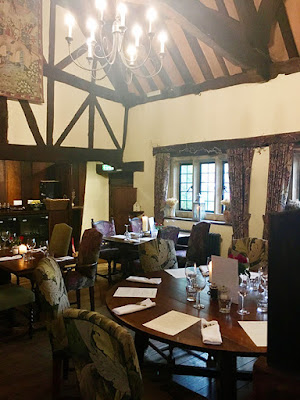 The food was good and filling, and the company was great. We'll probably go back at some point during the summer when the beer garden out the back is at its best. The land drops away behind the pub, giving a clear view across the cricket pitch below to the church, which is of similar vintage to the pub. It's utterly idyllic in the sunshine.

I hope you had a great weekend. Are there any ancient taverns near you?
Labels: drink mediaeval Somerset