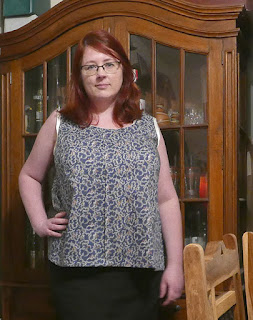 We're only just into the second month of the year and I have just completed the first of my nine projects, the Colette Sorbetto top.

I bought the fabric I used long before choosing a pattern – I just loved this rocket print. It's Liberty Tana lawn, so pretty costly. Because of that I didn't want to risk messing the cloth up. I scrutinised the instructions for the Sorbetto very carefully, the sizing in particular. Colette say they size 18 and up for a D-cup bust, and I'm a UK GG. For my other top I had to do a sizeable full bust adjustment. Yet from what I could tell, the Sorbetto would fit me perfectly. I wasn't convinced, so made a rough mock up from an old sheet to check last weekend. Amazingly, it fitted right away! The Sorbetto is loose fitting, so perhaps it hangs differently on other people, but I was happy to make it in my good fabric without any further pattern adjustment.


Although the pattern for the other top I made said nothing about seam finishes, I'm not 100% happy with the inside of that garment now. I left the edges raw, and they just look a bit shabby. Because of that I carefully French seamed the Sorbetto. That was a technique I practiced on the sheet stunt version. The seams look much nicer, and the garment should wear better. 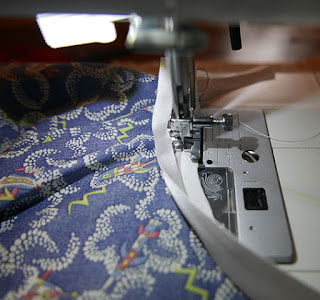 One of the reasons I was keen to make the Sorbetto was because it used bias tape on the neck and armholes, and I wanted to learn a method that didn't involve facings, which I'm not keen on. It was a little tricky for me as it called for precision and I'm a novice dressmaker, but I took it very slowly and carefully and it all worked well.

I used a pure silk tape because I wanted something as luxurious as the Tana lawn, but looking at it I wish I'd used something darker. I'm happy with the finish, but somehow the bright white just makes me think the top looks like my bra is showing! (Another good thing about this top: my bra does not actually show. That's a rarity with bought tops for me, and one of the reasons I'm learning to make my own clothes.) For some reason the neck taping has folded over a little in the photos, though it's very visible in person. 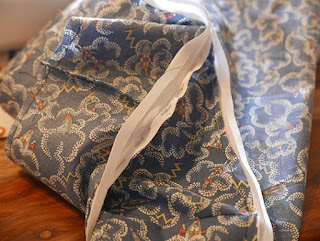 Carrying on my attempt to finish things off nicely, I did the hem by hand. It just gives a nicer result than a machined hem, I think. 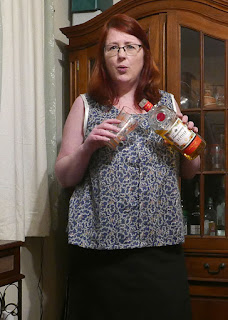 Cheers! Let's celebrate a good result. New techniques learned and put into practice, and a wearable garment made too. (Yes, that last bit should be expected, but I'm new and still amazed when I make something I'm prepared to leave the house in.)

I can see myself making this design again. There's a version with short sleeves that might be nice, and I think a plain one with some sort of lace or embellishment stitched behind the front central pleat, which gets a bit lost in the busy rocket print, might also look pretty cool. There's also that Jude fabric still calling me... I went to see a friend in London and deliberately didn't go to Liberty as I knew I'd have to buy some if I went in. But another Sorbetto isn't on the cards just yet; I've got another eight projects to complete first.
Labels: sewing