State of the Mim 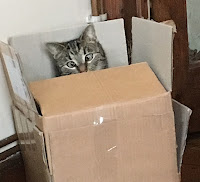 TL;DR – I've had a bug, and then a pig of a print deadline, hence the silence.

I'd been congratulating myself on not getting ill this winter, so of course I went down with something at the least convenient time imaginable, a few days before one of my magazines was going to press. There was no way I could go into work last Thursday or Friday, though. I tried going round the supermarket with Pete on the Saturday and that was enough for the weekend! It's frustrating because I'd decided to do more exercise and keep my back in good order, and had hit my 10,000-step target two days running earlier in the week, and the virus put a stop to that.


So, what did I do while poorly? I was stuck on the sofa, so watched an old movie (Dick Tracy Returns, from 1938) and a bit of really daft telly (Riverdale, modern, trés trashy), knitted a bit of my 1960s cardi/jacket thing and played some games. One, Call Of Cthulhu, is set in the 1920s, but I'm not sure it's one readers of this blog would enjoy. I'm also well stuck into a vintage crime novel so will review that for you at some point.

I'm still a bit snuffly now but had to get into work on Monday to get my mag to press. It all went on time, so that's good! I thought I was going to have to work late and miss the first episode of Sewing Bee, but luckily I didn't need to in the end. It's such a happy show.

Anyway, I hope you've been having fun, and that your Valentine was someone who looks at you the way Pippin looks at Overcooked 2... 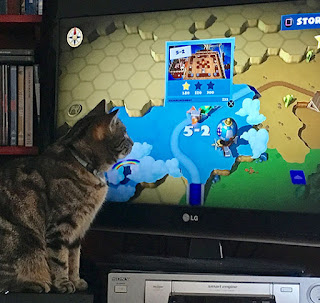