Shopping is no substitute for doing 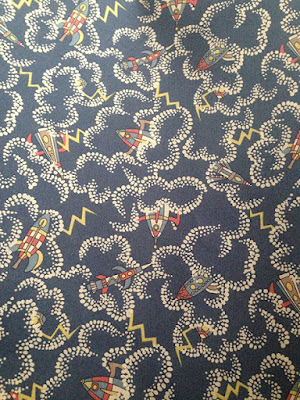 'Shopping is no substitute for doing' is something I really need to bear in mind, as I've found myself slipping, as a novice sew-er, into a bad habit I had as a knitter: buying more things to make stuff without actually making stuff. That's why I have five plastic crates of knitting wool; I think Mr Robot will divorce me if I acquire the same amount of fabric. That said, I had to have this Liberty fabric. The pattern is called 'Rocket Dance' and I got it from Shaukat Fabrics. A few online stores have this pattern, but not many seem to have the darkest background.

YES IT'S A NAVY BACKGROUND SOMEONE STAGE AN INTERVENTION!

Ahem. Anyway, I love the retro look of the rockets - if the name of this blog tells you nothing else, it should be that retro sci-fi is my jam - and have decided that when I've completed my 60s top I'm going to step back and make a Colette Sorbetto because it's easy and I would like to do something different before doing the 60s top in the vintage fabric. I really like the way the detailed rockets have fine black lines outlining them but the clouds are created with blobs of white. It makes the rockets feel more solid than the clouds. The Sorbetto is a 60s-inspired design, a simple sleeveless top with no fastenings, and looks like the sort of thing I'll wear over and over again. 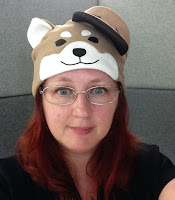 Something I probably won't wear over and over again but did have fun wearing in the office for a day was this hat promoting Valkyria Chronicles 4, which my colleage Jen brought me back from E3, the big games show in Los Angeles. E3 is basically games Christmas. It's when we learn what games are in development, what stage anticipated games are at, and so on. It started years ago as a way for devs and journos to get together, but has evolved into a massive jamboree and the general public go too now. My colleagues spend five days or so living on energy drinks, going to presentations and interviews by day, then afterparties (food much appreciated!), then back to their accommodation to write stuff, before snatching some sleep. I'll never go, but to be honest at my age I think it would break me!

Back to the sewing, though. I didn't work on my top over the weekend, but I did do other stuff. If you follow me on other forms of social media you might've noticed me being fairly quiet lately. I've just had to stop trying to do everything. And that paid off rather at the weekend. I got my little plants, grown from seed, all planted out, and I did some weeding. I did some proper cooking, and even made my own paneer as I had a milk glut. (I get a twice-weekly milk delivery from the milkman, but haven't been drinking much tea in the heat.) And I resumed work on my friend's cardigan and the end is in sight! Hopefully the joy of completing that will drive me to complete my top, and to start something else to help empty those five crates...