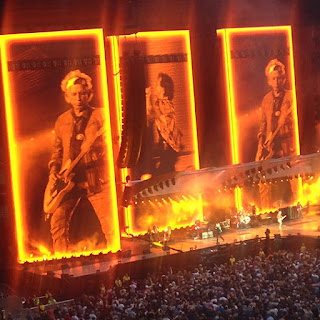 Last Friday* Mr Robot and I went to see the Rolling Stones in Cardiff. I've seen a few classic bands in recent years – ones younger than the Stones – and in most cases the years have taken their toll, especially on the singers' voices. On top of that, I only really know the classic songs from the 1960s and 1970s, plus the occasional hit, so expected the gig to be mostly me thinking, "That sounds good, I wish I knew it."

They played all classics, plus a blues cover and a cover of Dylan's 'Like A Rolling Stone'. Note I said "all classics," not "all the classics". If they'd tried to play every great song they'd ever done, we'd probably still be there now. Off the top of my head there was: 'Paint It Black', 'Sympathy For The Devil', 'Brown Sugar', 'You Can't Always Get What You Want', 'Honky Tonk Women', 'Gimme Shelter', 'Midnight Rambler', 'Jumping Jack Flash' and 'Street Fighting Man', and for the first time in a long time 'Get Off Of My Cloud'. (That's one I want played at my cremation, just for the laugh.) I'd have liked 'Ruby Tuesday' or 'She's Like A Rainbow' but... sometimes you get what you need, eh?

The whole band played fantastically, Charlie Watts grinning from ear to ear. (I've always had a soft spot for Charlie, the real bad boy of the Stones, even if Keith Richards got more attention.) But Mick Jagger... never got the appeal when I saw him in clips/music videos, from the 60s till now. But in the flesh he's a constantly moving streak of self belief, with a physique most emo 20-somethings would envy, even today. I cannot begin to imagine how sexy he must've been in his prime, nor how much energy he must've had. And his voice is still great. He did take a break mid-set, when Keef did a couple of songs, but I'm afraid that was my cue to head off to the loo, and judging by the queue at the ladies lots of other women felt the same. We want Mick.

I'll definitely see them again at some point. Mr Robot and I would go because we want to, but my mum also got all wistful as she never saw them back in the day, and they were always one of her favourites (in the 'Beatles or Stones?' argument she's always Team Stones), so we said we'd take her. Then she can experience the brilliance for herself.


*Why is this post so late? Because it was a hellish week. I ended up writing a supplement for one of my mags - over 60 pages in three days, on top of the day job - and then a friend was hospitalised in London so I raced over there on Saturday and the trains were all borked so it was a nightmare. Let's not say any more about last week.
Labels: 1960s 1970s Cardiff Music