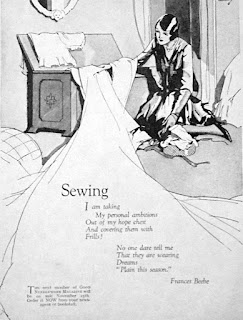 Do you know the old saying about having to do something for 10,000 hours to be any good at it? I'm starting to fear it might take that long for my sewing to get good. And that I'm going to be making this one pattern FOR THE REST OF MY LIFE.

Okay, that's an exaggeration. But it was only after I'd been knitting for two years that I started making things I was happy with, and the thought that I'm going to have to spend the same amount of time using my sewing machine without making anything wearable is pretty depressing. Yup, I've been working on the revamped top pattern with the full bust adjustment. It's mostly done, apart from the hem. But I'm still not 100% happy with it.


Good things: it goes on my body. Not too small, not too large, and the excess cloth above the bust is all gone. It doesn't lie completely flat at the armholes, which I suspect is because the FBA caused the armhole curve to be really sharp, so where the armhole is being forced into a rounder shape the fabric further out is having to accomodate that, but it's not terrible.

Bad things: the shoulders are too wide. Now, this shouldn't be happening, because I've already taken the top part of the pattern down to match my high bust measurement, but for some reason they stick out and look unpleasantly square. On the other version of the top they weren't noticeably wide, but I'm wondering if that's because the facings were cloth-only, no interfacing, so they had more drape and moulded to the shape of my shoulders more. This time I've used interfacing, and I think it's made the whole thing too stiff. SO I'm planning to unpick and trim back the shoulders by about half an inch. It might take a little time, but the whole point of this version 2 top is to get the pattern into a shape I'm happy with.

On which note, I've seen a blog post elsewhere about turning the separate facings (arm/neck) on a sleeveless top into an all-in-one facing. Wish I'd known about that before I started this!

Anyway, it's all a bit depressing because I feel as though yet again I've spent money on notions and fabric, and hours of my time, and all I'll have to show for it is some more scraps for future craft projects. Tell me it gets better!
Labels: aargh sewing