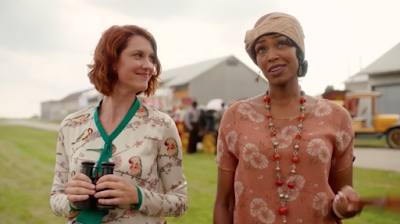 
The show was created by Carol Hay and Michelle Ricci, two women who'd worked as writers and producers on Murdoch Mysteries. It has a Toronto setting like that series, but is set a couple of decades later and the leads are predominantly female. Not just predominantly female: Frankie's partner at the detective agency, Trudy Clarke, is a black lady, and morgue attendant Flo is a mature, rotund one.

I'm guessing that like with Murdoch Mysteries, the programme makers will have rejected accuracy in favour of inclusiveness. Whether you approve of such things is up to you; to be honest I quite enjoy it. Murdoch is played straight but has its lighthearted moments - every so often an episode will feature a famous character, such as Nikola Tesla or Mark Twain - and I'm hoping that will be a feature of Frankie Drake. It makes Murdoch feel more like a classic sort of adventure story, a little Dick Barton, perhaps, and I'd say a show about a crime-solving former espionage agent definitely needs a dose of derring-do.