The retro style of The Chilling Adventures of Sabrina 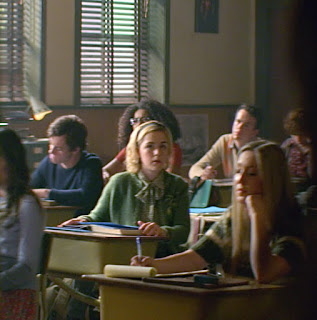 Given it was aimed at young people in the late 90s/early noughties, I'm guessing most people who read the Robot won't have watched Sabrina the Teenage Witch. I never really did - caught the odd episode here and there, but I was probably a good decade older than the target audience. Netflix has turned the old Sabrina the Teenage Witch comic books into a TV series again, and while I'm probably definitely too old to be the target audience, I really enjoyed them. Called The Chilling Adventures of Sabrina, it's darker and more complex than the older series.

"C'mon Mim," you're saying, "The original comics might have started in the 1970s but is this really an appropriate topic for the Robot?"

Well, yes, actually, because one thing that really struck me is how the programme's designers have used retro styles and elements to create a strange not-modern-but-modern world.
No single element is authentically vintage styled, yet there's very little that feels utterly 21st century. Sabrina Spellman's vampish Aunt Zelda, with her Veronica Lake waves, heavy metal jewellery and slinky dresses, is a film noir femme fatale. (Quite literally fatale as she's prone to killing and resurrecting her sister.) Aunt Hilda, scatty and constantly making preserves, is a curious sort of midcentury housewife, with Yoothalicious blue eyeshadow and baby pink lipstick. You know instinctively that Zelda is the older and more dangerous, because of the vintage tropes the designers are playing with.

The one who really got my attention was Mary Wardwell, Sabrina's teacher who becomes possessed by Madam Satan, played by Michelle Gomez (Missy from Doctor Who). At one point I sat bolt upright and thought I want that frock. She's got several gorgeous little late 50s/early 60s ones, and I'm convinced from the prints that at least some of them are original. Paired with midcentury brooches, they're fantastic. She's not alone in her 60s styles; Lady Blackwood also sports some great frocks, including one black one with a rolled collar, but Madam Satan definitely catches the eye more. I found myself wondering if the designers were influenced by Mad Men's Joan, wanting that combination of prim yet sexy.
The younger people in the show mostly seem to be dressed from more recent decades, separating them from the older ones, though even there you can see a really strong retro element. Their style is more casual than that of the adults, but there seems to be very little modern sportswear. The sporty boys at the high school wear their letter jackets, and Sabrina and her friends often have strong late 60s/70s elements to their clothing. Sabrina wears a gorgeous 'poor boy' sweater at one point, striped in autumnal colours. Her knitwear game is always strong, from cool colourwork cardis to well-fitted cable jumpers.

As well as the brown jacket you can see Roz in in the photo below, she's got an amazing brown one covered in brightly-coloured embroidered flowers, with a dog-ear collar. Cream poloneck, an amazing multicoloured crochet sweater… Sabrina may be the star, but Roz definitely dresses best of the younger characters.
One group of students does stand out: the Weird Sisters, at the witching academy where Sabrina also studies. While their day dresses tend to be simple black ones with white lace collar and cuffs – think extra-fancy Wednesday Addams – their nightwear and more elaborate outfits feels like Victoriana through a Hammer horror filter. I don't think it's suggesting an age difference, as the Aunts' and Miss Wardwell's dresses do, but one of attitude: the Weird Sisters are the polar opposite of Sabrina's mortal friends, their heavy makeup and luxurious fabrics a complete contrast to the mortals' denim, flannel and knitwear.

The blending of vinage continues into the sets. It's almost jarring that Sabrina's boyfriend uses a mobile phone at one point, because most characters use landlines. The tea set the Spellmans use is Royal Albert Old Country Roses, which is still in production but has been around for decades. There are no modern band or film posters, the furniture looks old-fashioned, even the cars are older models. Yet it's nowhere specific in time, not the 50s or 70s or 90s. In its eclecticism the show is very now, and its storylines are of the moment. I love the way it mingles vintage styles. Paradoxically I think it'll be less likely to date badly as a result, though I'd be interested to know what younger viewers make of the eclectic retro style.

Have you seen The Chilling Adventures of Sabrina? Did you like the little retro touches?
Labels: costumes horror television