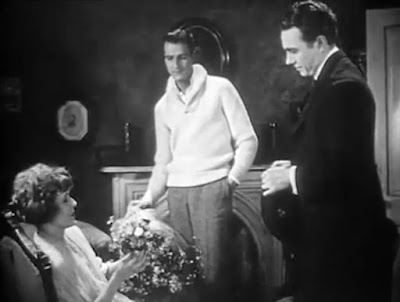 A rare treat for Mr Robot and I last night: we went to see two silent films at Chapel Arts in Bath, as part of the Bath film festival. We saw The Blot (all the photos accompanying this post are from that) and Suspense, both directed by Lois Weber, one of the earliest and greatest female film directors. It's not the only silent film showing for the festival, as Pandora's Box, Louise Brooks' most iconic film, is being shown tonight, but Pandora's Box is so popular I know I'll get other chances to see it on the big screen, whereas I can't say the same for Weber's films.


Suspense is a one-reel film, only about ten minutes long, in which a young mother at home alone is menaced by a tramp who breaks in to her house. She managed to phone her husband, so the suspense is partly in the car chase: his car gets stolen outside his office, so he and the police are in hot pursuit. It's a good job the chase ends outside his house, eh? 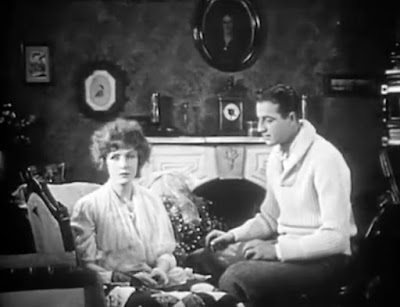 The Blot is longer, and tells the story of an impoverished college lecturer. His family has tattered clothing - there are frequent shots of worn-through shoes and threadbare furnishings. His friend, a young minister who's clearly very taken with the lecturer's pretty daughter, is equally poor. One of his pupils, a boorish rich student, is also very taken with the daughter, who works in the town library.

And yet the story doesn't go quite the way you might expect. Weber was a Christian evangelist, and rather than the rich boy and the snobbish woman next door getting their comeuppances, or some stroke of good fortune hitting the minister and the lecturer, everyone ends up redeeming themselves either by offering or accepting help. Fate doesn't play a hand, people do. It's a happy ending of sorts; perhaps the daughter doesn't end up with the beau she'd prefer, but if you average out everyone's happiness it's probably the happiest possible ending. 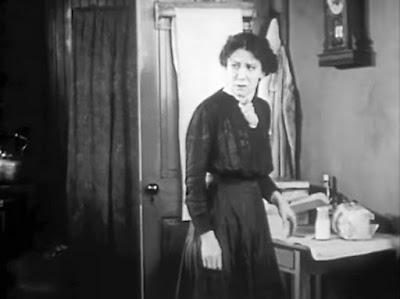 I wouldn't say either film will ever feature in a list of my silent favourites, but that's okay. I was fascinated by all the little details, from the knitwear the rich kids wore to the utensils in the kitchens to the grocer's shop. It was interesting to see a different type of movie to the ones I usually choose, and any silent with a live accompaniment (provided by Lillian Henley) is good in my book. The size of the venue was good – not too large; easy to see and hear everything – but the seats were the least comfortable I have endured in a long time, and if I see anything else there I'm taking my own cushion! I'd definitely love to see more 'live' silents in Bath. (And on that note, I notice I really must update my what's on... listing.)